Rewriting their fate: how the world’s ‘invisible’ widows are fighting prejudice

Suzy Solley, PhD Candidate at QMUL's School of Geography, writes about the discrimination faced by widows in many parts of the world. 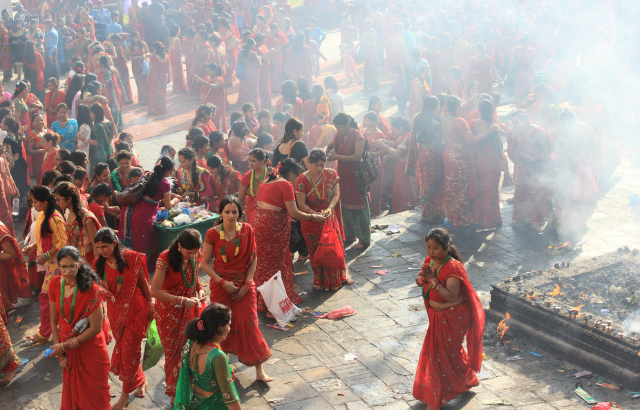 Imagine that you have just lost your husband. Your husband’s family take you to the local river, take out your nose ring (given to you in marriage), wash off the red tika from between your eyes, throw your red beaded necklace into the water and smash your red glass bangles on the rocks. You watch these items, as symbols of your marriage, float away downstream. You are then made to remove your red sari and change into plain white cloth. In Hindu culture, red is the colour of marriage, of sexual potency. Outside of marriage, it is the colour of threat and disobedience.

For years this has been the reality for many Hindu widows. Indeed, similar societal controls have been the norm for millions of widowed women globally. Because they are often seen as a threat, uncontrolled by a man, they are made to be invisible. But slowly widowed women are fighting back.

June 23 is International Widows' Day, and it seems an appropriate time to explore the historic discrimination of widowed women and the ways in which they are still oppressed, but also to look at the actions they are taking themselves to become “visible” once more.

In the West, familiar fairy tales tell us something about how widowed women have historically been perceived. While some widows have been depicted as noble, devoted and resilient, all too often they have been characterised as wicked and evil.

The stepmother in the beloved fairy tale Cinderella, a widow who remarried a widower and was then subsequently widowed again, is a well-known example of how they have been portrayed as evil. The witch in Rapunzel and the wicked Queen in Snow White are also widows.

But rarely have these historical caricatures been linked with the current discrimination against widows. These portrayals are supposedly fictional, fairy tales, but they were born out of, and have mutually reinforced, many assumptions associated with widowed women.

By tracing the history and the premise behind sati, a Hindu form of ritual suicide, we can begin to understand the animosity shown towards widows. Sati was justified because it was believed that a woman must have done something wrong in her previous life, brought bad luck to her husband and was therefore being responsible in some way for his death.

To demonstrate her true devotion to her husband, and to ensure her identity was still tied to him, the widowed woman committed sati. Sati was outlawed in the early 20th century – although there are still cases of it. But even with such changes to the law, widows have struggled to fit into a patriarchal society which had no place for them.

They were perceived as social anomalies, out of place within societies that traditionally stress that a woman’s place is with a man. It is this idea of being “out of place” which is common to widows' discrimination over time and across space, and partly explains why they have been characterised as evil and wicked in traditional fairy tales.

Discriminatory practices and restrictions therefore exist in many societies around the world to ensure that these “aloof” women are controlled, and can live “independently” without unsettling the patriarchal status quo.

In Hindu cultures, such practices are primarily intended to control a widow’s “sexual heat”; women, and especially widows, are perceived to have higher sexual libidos then men and it is thought that they are less able to control them.

These practices, which are intended to prematurely age and “cool” the body, ensure that a widowed woman is controlled and remains devoted to her husband. They range from what clothes and accessories she can wear, to what she can eat, to where she can go, to the relationships she can have and to the events that she can attend. They can even dictate her body language and gestures.

The purpose is to make widows “invisible”, pushing them to the fringes of society. So although sati was outlawed, the continuing presence of these restrictions has meant that for many years widowed women have continued to live a “social death”.

However, over time and in countries across the world, widows have been challenging this discrimination and their historic invisibility. On a dedicated day to widows, it is important to celebrate these efforts. Women for Human Rights (WHR), an organisation supporting widowed women in Nepal, has been particularly successful in this.

In 2005, it started a campaign called Rato Rang Abhiyan (Red Colour Movement). Its aim, to encourage widowed women to wear red, was surely a simple one, yet in the shadow of sati’s legacy it was a bold aspiration. This ongoing movement involves WHR members putting red sindur (powder) on the foreheads of widowed women as a symbol of resistance against the discrimination they face on the basis of their marital status.

For many women, this is the first time they will have worn anything red since their husband’s death. Village by village, this initiative has gained momentum, and now, in contemporary Nepal, many women have even started gifting each other red clothing and accessories upon widowhood.

Others have started celebrating, dancing and singing during Teej. Teej is a festival traditionally for married women to celebrate, and pray for, the long lives of their husbands. Widows now resist their historic exclusion from this festival, and celebrations generally, via their very participation. By singing and dancing, they transgress practices that state they should remain hidden in the shadows of society, and that they should not outwardly express their emotion, especially their joy or happiness.

Their participation is perhaps even ironic given that the festival traditionally is a day for women to pray for a long life for their current - or future - husbands. By wearing red sindur or celebrating Teej, widows resist their historic exclusion, while conforming to the traditional importance of marriage for women in Nepal. Widows are using existing norms and traditions in Hindu culture to defy the very system that discriminates against them. This shows the complexity of women’s empowerment. Widowed women are rewriting and reworking these practices; keeping the aspects that suit them and discarding the ones that don’t.

Since the devastating 2015 earthquakes in Nepal, I have followed WHR’s activities online, and I have witnessed the central role of their widowed members in distributing and organising aid and relief. Through their collective action, widows are increasingly becoming a strong and active presence in communities where they were once invisible and perceived as being inferior.

Wearing a small line of red sindur on the forehead, dancing under the hot September sun during Teej, or putting on a red sari may seem like small and insignificant acts, but thousands of tiny ripples can come together to make bigger, stronger and transformative waves.

Occasions such as International Widows' Day importantly bring attention to underrepresented groups and important social issues, but how are we to represent and commemorate them? We should, of course, highlight the issues and inequalities, and the structures that perpetuate them, but we should equally celebrate the brave and creative ways in which widows are empowering themselves and each other.