Researchers translate The 120 Days of Sodom for Penguin Classics

Described by its infamous author as “the most impure tale ever written since the world began,” The 120 Days of Sodom has fascinated and shocked readers ever since it was first published. 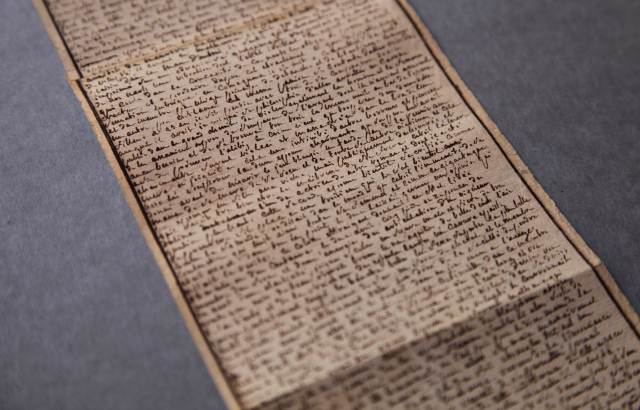 In September 2016, the book will be released as a Penguin Classic, translated by Dr Will McMorran, Senior Lecturer in French & Comparative Literature at Queen Mary University of London, and Dr Thomas Wynn, Reader in French at Durham University.

It is the first truly accurate translation from French to English and captures the brute force of the original work in all its horror (unlike the rather eccentric version first published by the Olympia Press in 1954).

First published in 1904, The 120 Days of Sodom was written nearly 120 years earlier in 1785 by the French aristocrat, Donatien Alphonse François, better known as the Marquis De Sade.

Dr McMorran said: “The 120 Days of Sodom is arguably the most extreme work of fiction ever written: readers expecting an eighteenth-century version of 50 Shades of Grey won’t just be disappointed – they will be horrified. It is hard to imagine a more challenging and disturbing text – or a more powerful one.”

Sade was one of the most notorious libertines of his century. He wrote the book in 37 days in his prison cell in the Bastille, where he had been incarcerated by a royal warrant after a series of public scandals involving his ill-treatment of prostitutes. He wrote the novel on a scroll made by gluing sheets of paper together: by the time he had finished it was twelve metres long and eleven centimetres wide. He kept the scroll in a copper cylinder which he hid in a crevice in the wall of his cell.

On 3rd July 1789, eleven days before the storming of the Bastille, Sade was moved to another prison in the middle of the night and forced to leave his belongings behind – including the scroll. He never saw it again and wept “tears of blood” for his lost novel. It was not destroyed, however: a young man called Arnoux de Saint-Maximin took it from Sade’s empty cell and sold it to a Provencal aristocrat, whose family kept it for three generations.

The scroll was sold to a German collector at the turn of the twentieth century, and published for the first time in 1904 by the pioneering sexologist, Iwan Bloch. In 1929 Sade’s descendants, the Nouailles family bought the scroll and kept it until 1982, when they entrusted it to a friend, Jean Grouet, to have it valued. Grouet stole the scroll and smuggled it to Switzerland, where he sold it to a collector. It remained in Switzerland until 2014 when it was bought by a private foundation, Aristophil, for €7 million and repatriated to France.

The story does not quite end there, however: the foundation that bought the scroll is currently under investigation for fraud, so the scroll, which started life in prison, is now under lock and key once again.

Though Sade’s works have been available in paperback in France – and the U.S.A. – since the 1960s, they were banned for a long time in the UK. During the Moors Murders trial of Ian Brady and Myra Hindley in 1966, it emerged that Brady had a copy of Sade’s Justine among his books (he also had a copy of Dostoevsky’s Crime and Punishment, but that did not attract as much attention). The revelation, widely reported in the press, provoked a moral panic about the power of fiction to inspire violence; a ban on the publication and importation of Sade’s works swiftly followed and lasted until the 1980s.

Though some of Sade’s milder works have been available in mainstream ‘classics’ editions for some time, the publication of The 120 Days of Sodom in Penguin Classics constitutes a landmark in British publishing history. Dr McMorran said: “When a work as extreme as The 120 Days of Sodom becomes a ‘classic’ the very idea of what makes a ‘classic’ changes in the process: Literature no longer seems quite as respectable, or quite as safe, as it did before.”