Britain’s centralised democracy has contributed to many of the most pressing problems in the country’s poorest communities, according to former Deputy Prime Minister Michael Heseltine. 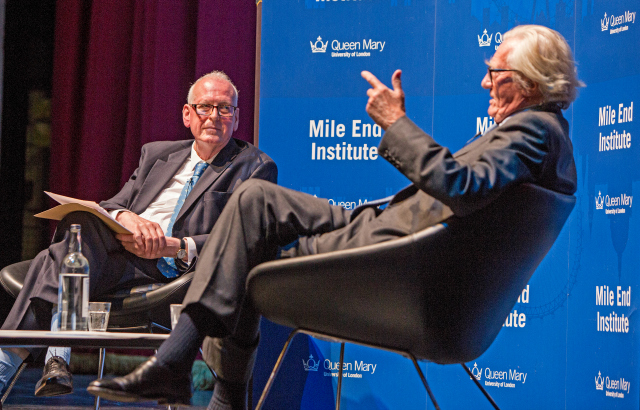 Speaking at the second annual Hennessy Lecture at the Mile End Institute, Queen Mary University of London, he called for a more radical and ambitious approach to devolution.

Lord Heseltine said: “Dissatisfaction and total disengagement with the place you live is a stark feature of parts of British society. The recent referendum reinforced that message. I don’t mean a lack of pride in your city or your suburb. It is more local and more personal than that. There are communities, even streets that combined together evoke no sense of pride. No pride in the architecture, no access to the people who can support you to get ahead in your life, and no belief you have a stake in your community and its future.”

Lord Heseltine said that devolution from central government to local communities is the most effective way to repair the gulf between decision-makers and communities. He welcomed the fact that in addition to Northern Ireland, Scotland, and Wales, about half of England’s population will soon have some form of devolved power from Whitehall.

“The power of office will bring devolved decision making and budgets across a whole multitude of areas like transport, skills provision and business support. It will also come with up to £6.5 billion for investment in infrastructure over the next 30 years announced by central Government, but under the direct control of those places,” said Lord Heseltine.

Lord Heseltine emphasised the need for joined-up thinking across government departments. He said that all too often, stand-alone services such as local transport and employment support are designed for the convenience of the provider rather than the end user. He called for a radical approach to devolution of social services.

“Take Greater Manchester’s control of the National Health Service as an example. As well as giving local clinicians say on the provision of health and care services locally, it has opened up the opportunity for a dialogue with the private sector on medicines and treatments. In doing so it has helped attract new inward investment,” said Lord Heseltine.

He said that while devolution will keep happening, government and policy-makers need to be more ambitious.

He concluded: “When I arrived in Liverpool after the riots of 1981 it was a forgotten city.  The people of that city have changed it beyond recognition. So much has been achieved since. An extraordinary legacy. Now let us go further and deeper and ensure that the forgotten people of our society can be offered a hand, helping and encouraging them to a fuller, more rounded life.”