Professor Kiera Vaclavik, from QMUL's School of Languages, Literature and Film, writes about children, stories, and a scare at bedtime. 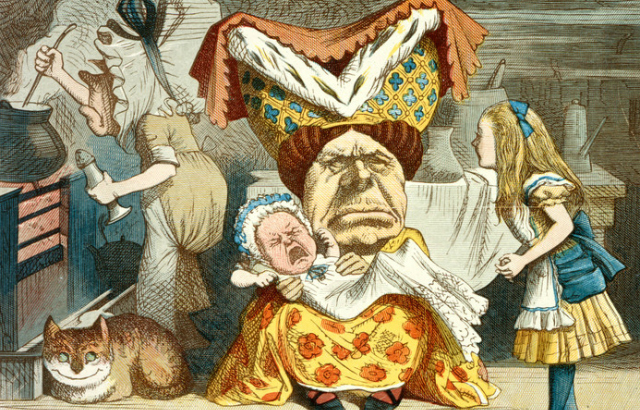 © From John Tenniel’s Alice in Wonderland

As a children’s literature scholar, I’m filled with horror by the results of a recent survey indicating that over a third of parents avoid reading frightening stories to their children. And as a parent of two small children, the study makes my heart sink and – in the manner of blogging mother Gill Sims – reach for the gin.

What exactly counts as frightening in a children’s book is a fairly moot point. Parents in the study named the Wicked Witch of the West and Red Riding Hood’s grandmother-gobbling wolf as fitting the bill.

Of course, it must vary from child to child. When I told my six-year-old what I was writing last night (i.e. this), he promptly decided against the poisonous animals section of Creaturepedia for fear of it giving him nightmares – we read about the spiky critters instead. Ernest the Moose, on the other hand, who is so large that his squirrel friend has to construct a fold-out page so that he can fit in his own book, is a source of huge amusement to my three-year-old – but possibly claustrophobia-inducing in another (more empathetic) child. Personally, I find the Cat In The Hat pretty sinister. And the Babar books are also deeply disturbing – in their representation of racial politics.

Fear is a moveable feast, temporally, geographically and culturally. Alice of Wonderland fame may be widely regarded as the epitome of innocence and delight but she almost never laughs, is fairly constantly belittled and berated, and spends a good deal of time more or less explicitly contemplating life after death. Reader after reader reports being scared out of their wits by John Tenniel’s iconic illustrations.

All the (good) deaths and funerals that permeate 19th-century literature must be more troubling in today’s secular society than they would have been at the time. The classic example that does the rounds of the children’s literature world is Mary Martha Sherwood’s History of the Fairchild Family (1818-1847), famously featuring a father escorting his children to a hanging in order to teach them about the consequences of fraternal discord. Today, even quite young Francophone children can read stories about child slavery and deathly hurricanes and (in picture book form) the day of the dead.

There is certainly no shortage of dark and difficult material in children’s books, even for the very young. Having spent a good deal of my scholarly career on books for children featuring journeys to hell and back (not to mention slavery and sexualised treasure maps), and having recently examined a doctoral thesis on physical, sexual and psychological abuse in French children’s literature, I know that there are no taboos; that nothing is off–limits in books for the young.

And the scholar in me knows that it’s important for children to encounter difficult and challenging material, to confront their fears and anxieties in the space of the book. Quite apart from anything else, being afraid or horrified or disgusted can, in the closed, reassuring world of narrative, be a thrilling and deeply pleasurable experience.

Even when it’s not enjoyable, it’s still vitally important. The inevitable comparison is with forms of physical activity, and, in a health and safety obsessed, no blame no gain culture, the dangers of wrapping children up in cotton wool. Kids need to get stung and fall out of trees if they’re going to build the resources to deal with all the various bumps and knocks and traumas that their lives will throw at them.

And I know all this. But as a parent, and especially as a tired working one (what other kind is there?) I can’t help feeling that this study is yet another stick with which to beat already battered and bruised parents. At the end of a long day, having just seen the evening news with all the woes of the world on view, almost the last thing I want to do is deal with death and darkness and destruction when I read my children their bedtime stories. What I want is to be close to them and to share something stupid or funny or beautiful before they sleep.

Perhaps I’m putting my own needs before theirs. Perhaps it will be different when – if! – they read alone. But for the time being, it seems to me that what matters most is the intimacy that reading can generate. A sense of shared pleasure and contact and connection.

There are obviously plenty of other times in the day when books can be pored over. But I’d bet that few really frightening books for children are owned by parents today. Certainly, even in the fairly progressive, cosmopolitan and (I like to think) cultured world my children are growing up in, it’s fairly unimaginable to offer a “difficult” or frightening book to a child as a birthday or Christmas present. There are definitely books I’ve picked up and put back down again, shuddering at what Johnnie’s parents would think about marking their much-loved infant’s birthday with a picture book about the plight of child refugees.

Because of this, tons of ultra anodyne books are littering the homes of flustered and frenetic families today. Children’s books are big business and publishers both cater to and stoke parental anxieties and protectionism. Big companies take punts on “difficult” books less and less, and it’s left to small, imperilled independents to fill these crucial gaps.

And this is one of the many, many, reasons why we should support small publishing initiatives like Tower Block Books, and why public libraries and independent reading in schools must, categorically, be protected. Books are certainly gifts to the next generation, but they’re not just for Christmas (or birthdays). Parents, publishers and politicians all have their part to play. Children need to encounter all manner of books from all manner of sources dealing with all of the multifarious experiences of life. Children need the books that parents like me can’t themselves always face.