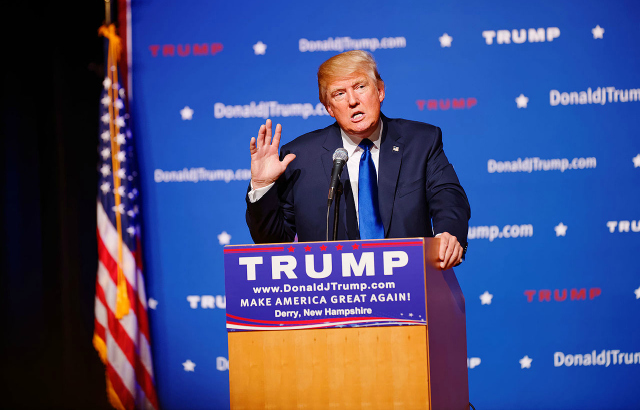 But in the context of political communication, what’s especially striking about Trump is that he rarely make use of that sharp political tool: the central metaphor.

A good central metaphor is typically one of the hallmarks of any effective political speech. It provides a logical core around which an argument can cohere. Enoch Powell’s famously divisive “rivers of blood” speech carefully builds in intensity until it compares his own foreboding about immigration policy to the prophecy from Virgil’s Aeneid about seeing the river Tiber “foaming with much blood”.

In American politics, Franklin D. Roosevelt famously used a war metaphor in his depression-era Inauguration speech, when he proclaimed: “I assume unhesitatingly the leadership of this great army of our people dedicated to a disciplined attack upon our common problems.”

One of the reasons this speech worked so forcefully was FDR’s ability to identify the resonance between the power of the post-depression American workforce and that of an army in a battle.

In classical rhetoric, Aristotle even went so far as to say that the ability to discern these types of similarities was a sign of genius. As he saw it, a similarity between two things – a workforce and an army, say – can generate a new type of meaning for the listener. It can collapse all the complex problems and ideas together and thereby make them both intelligible and gripping.

This has long been considered the definition of astute political rhetoric, and perhaps never more so than in the 21st century, the age of the glib soundbite. But Trump, who has careened through almost every conceivable political norm in this election cycle, almost never uses the kind of coherent metaphors that political rhetoricians have relied on for millennia.

Linguists sometimes make a distinction between “live” and “dead” metaphors. Dead metaphors are those used so often in our everyday speech that we forget they are metaphors, and instead hear them as literal language. It doesn’t take much to grasp this concept; did you notice that you can’t actually “grasp” a concept but that it’s a dead metaphor?

Like the rest of us, Trump uses plenty of these: recall when he cackhandedly tweeted that the Scots were taking their country back. Of course, one doesn’t literally “take back” a country, but we use the metaphor so often that its figurative quality no longer stands out to us.

Live metaphors are much more difficult to craft. While the term wasn’t around in Aristotle’s time, the examples he used are the types of metaphors we might call a live metaphor. Like FDR’s metaphor of the “great army”, live metaphors tend to have a lasting as well as immediate impact. They have the power to define, unify, and grab the attention of the listener. Most of all, they help to create a central, coherent structure on which the speaker can build their argument.

Donald Trump rarely uses live metaphors, but when he does, they literally make headlines. In his eagerly anticipated “serious” foreign policy speech in April, he said he was going to “shake the rust off American foreign policy”. This live metaphor became the headline for the Financial Times’s review of the speech. The metaphor certainly gets our attention – but did he mean to say “shake the dust off?” And is he really going to shake the US that hard?

Aristotle wouldn’t have been impressed.

Trump’s usual rhetorical stock-in-trade is a random tumble of metaphors, some dead, some alive. When he said in May that China is “raping our country” it certainly caught people’s attention. But then in the next line of the speech he said, “we have the cards, don’t forget it”.

Having or holding the cards is almost a dead metaphor; we understand the phrase without thinking of a card game. But then comes the next line, and unlike FDR’s famous link between “the great army of the people” and the “attack on the common problem”, a rape metaphor and a card game metaphor hardly resonate with each other at all.

Because of this sort of metaphorical chaos, Trump’s speeches generally lack a unifying image. But then again, perhaps incoherence is precisely what makes his rhetoric so appealing.

To those who rally behind Trump, his brash and outrageous statements aren’t gaffes, but examples of truth-telling bravery. The reason for this may be not just about the content of Trump’s speeches, but their structure. In casual spoken English, our metaphors and our speech are not always perfectly pitched, and can sound more like a series of fragmented ideas.

This is precisely what Georgetown University linguist Jennifer Sclafani has pointed out about Trump’s style: because his sentences are fragmented and they jump around, his rhetoric “may come off as incoherent and unintelligible when we compare it with the organised structure of other candidates' answers. On the other hand, his conversational style can also help construct an identity for him as authentic, relatable and trustworthy, which are qualities that voters look for in a presidential candidate.”

So whether or not Trump is elected, his campaign may yet have a deep and lasting impact on modern political rhetoric. All the rules of functional speech, it seems, can be broken.