Chris Millard, Wellcome Trust Medical Humanities Research Fellow, reviews the film Demolition (2015) in the context of his work as a historian of the emotions. 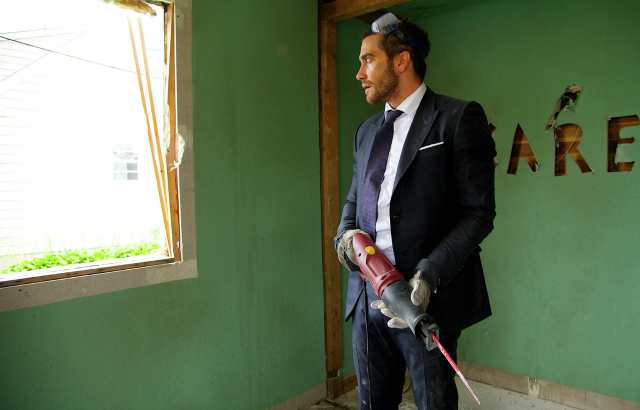 A tragic car accident. Investment banker Davis (Jake Gyllenhaal) emerges from the smash unscathed. His wife Julia (Heather Lind), however, is killed. Davis appears to be totally unable to feel anything about this event. So starts Demolition, a new film that – researcher of emotions as I am – I eagerly went to see.

A rush of telltale signs seems to signal a variety of emotional problems in Davis. These are problems that have occupied psychiatrists, psychologists, counsellors and social workers throughout the 20th century. I lapped these up, thinking Davis was slowly being revealed as a classic psychopath. An obvious disregard for others. Obsessing with small slights, like his peanut M&Ms failing to drop from a vending machine. Seemingly pointless lies to strangers on the train to work. Pulling the emergency cord of the train to avoid having to give an emotionally significant response. Practising crying in the mirror at his wife’s wake.

At this point I was sure. He admits to never having loved his wife, claiming that marrying her was an easy thing to do. He’s an investment banker, fitting today’s vision of the rich, charming, empathy-free psychopath – think American Psycho.

What is a psychopath?

Psychopathy became a prominent issue in Britain and America during the 20th century. The concept was imported to British psychiatry from America by David Kennedy Henderson, an Edinburgh psychiatrist.

Concerns with juvenile delinquency and “anti-social behaviour” brought forward the figure of an easily angered young man, drifting between jobs, with grandiose ideas, a chip on his shoulder and an inability to understand why he wasn’t as successful as he thinks he should be. The Royal Medico-Psychological Association defined psychopaths in the 1950s as people with a “persistent anti-social mode of conduct” that may include:

Pathological lying swindling and slandering; alcoholism and drug addiction; sexual offences, and violent actions with little motivation and an entire absence of self-restraint, which may go as far as homicide.
The problem with psychopathy as a concept is that it is rather circular. Barbara Wootton, a prominent critic of the term, lays it out very clearly: psychopaths are “the model of the circular process by which mental abnormality is inferred from anti-social behaviour, while anti-social behaviour is explained by abnormality”.

The key word in all of this is “social”. Social responsibility and anti-social behaviour. Davis is repeatedly confronted with his father-in-law, the straight-laced, emotionally repressed Phil (Chris Cooper). However much Phil tries to hold in his emotions, he appears on the verge of breaking down. Davis on the other hand, appears completely disengaged. He remarks on the atmosphere of the bar they’re in, right in the middle of Phil’s emotional confession of his pain. This sets up the key contrast: Phil is repressed, while Davis appears to be unable to respond emotionally at all.

But then my theory is destroyed. Davis begins to connect with a customer service operator named Karen (Naomi Watts), at the vending machine company that owes him the M&Ms. He meets and also connects with her son Chris (Judah Lewis), who is struggling with his sexuality. This part of the film is arguably shot with the most self-conscious symbolism in all of cinema history: Davis smashes up his house with a sledgehammer (in case the audience doesn’t get it he actually refers to this work as “destroying my marriage”). He reconnects with the world, through Karen and Chris. He uncovers emotions when he discovers an unsettling revelation about his late wife.

So in the end it isn’t about psychopathy. It’s about shock, or grief, or delayed emotional reactions. Because then all the emotions do come out, and he makes up with his late wife’s family, and funds a carousel for children with special needs in her memory.

There is still something interesting here, despite the saccharine resolution. It’s about having the “right” emotions, in the right contexts, and how difficult this can be. Even in the aftermath of a life-changing event, where all the old certainties have been upended, we must tread a fine line. Grief is fine, but not too much, and not for too long. But not too little either, and don’t be flippant. Emotions and emotional expression come easily for some. What some people feel fits into lots of the right boxes for the particular time and place. But what if you are unable to process your experience in those socially-sanctioned ways?

But I still have doubts. It is implied at points that Davis has never really had the right emotions his whole adult life. Admittedly, he might just be projecting that affective flatness back from his “in-shock” state. But then again, maybe he is empathy free and emotionless and he’s just learned to fake it a little better. Who buys a carousel for emotional closure? Clearly somebody with no idea about human emotional response.

But here are the questions that the film could have explored, but didn’t: how do we deal with people whose emotional responses we don’t understand? Are they ill? Are they bad? Instead, Davis resolves the questions and everything is fine. But we all have points at which our behaviour, or emotional response, or both doesn’t match what others expect. Who gets to decide those expectations, or the consequences when these things don’t match up?