Queen Mary University of London’s life sciences education programme, Centre of the Cell, celebrated its 100,000th participants after a visit from a Tower Hamlets primary school class on Friday 17 April 2015. 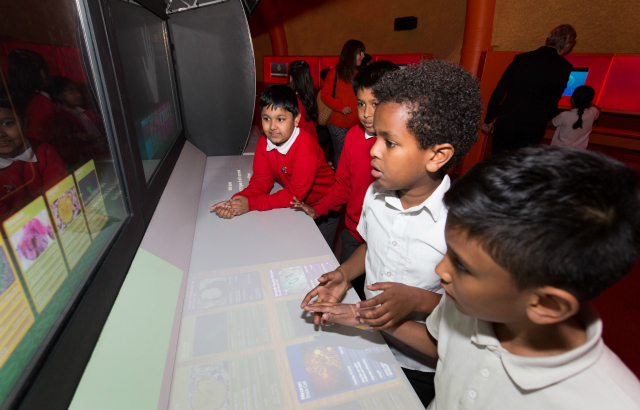 A class of 30 Year Four children from Thomas Buxton Primary School passed the visitor milestone when they took part in an interactive pod show - an immersive theatrical experience with games and objects to educate about cell biology and biomedical research.

Centre of the Cell, which also celebrates its 5th anniversary this year, is a unique cell-shaped science centre suspended above a real biomedical research laboratory at QMUL’s Whitechapel campus. Centre of the Cell has five main aims: to inspire the next generation of scientists and healthcare professionals; stimulate dialogue, interest and excitement about biomedical research; raise aspirations, especially in the local community; widen participation in further and higher education and to help improve health and wellbeing especially in East London.

Since opening back in 2009, Centre of the Cell has transformed science outreach in the local area with around 50 per cent of all school participants coming from a ten-mile radius of Whitechapel.

Professor Fran Balkwill, cancer research expert at Queen Mary University of London and Director of Centre of the Cell, comments: “Getting more and more young people interested in science is critical, as today’s children are the cancer researchers, brain surgeons and computer scientists of tomorrow. Finding new ways of engaging children in science is a key aspect of showing how fascinating and exciting it really is as a subject – and that’s what we aim to do at Centre of the Cell. I am hugely proud of all we’ve achieved in the past five years.”

The motivation for developing Centre of the Cell was the local population of the East End, an area of social deprivation and poor health, with a large immigrant population. There was a need to inspire and motivate the local school children into higher education and to site a science centre in an area that would not traditionally be anticipated to draw a large audience.

As the project has evolved the team at Centre of the Cell has responded to the increase in audience demand by creating a programme of popular science shows and workshops, such as ‘Snot, Sick and Scabs’, ‘Teethtastic’ and ‘Spores, Sores and Sickly Bugs’, which are delivered in schools and also on-site in Whitechapel

Katie Chambers, Head of Learning at Centre of the Cell, added: “In five years we’ve achieved a huge amount and have inspired many children along the way. We look forward to building on these achievements in the following years. We are really excited to welcome the children of Thomas Buxton Primary School here to mark this fantastic milestone.”

The Centre also offers work experience placements, revision and mentoring sessions, careers workshops and volunteering opportunities for young people through the Youth Membership Scheme for those aged between 14 and 19.

As Centre of the Cell continues to expand there are plans for new projects in 2015 including an interactive game which will allow visitors to build a tumour microenvironment and then attempt to destroy it with the latest immune therapies, and designs for a second Pod to help expand visitor interest.

For more information head to www.centreofthecell.org