A poo racing video game which aims to change attitudes towards defecation and bowel health has been launched by Queen Mary University of London (QMUL). A second new game, Gene Quest, has also been created to encourage interest in one of the world’s largest genetics studies. 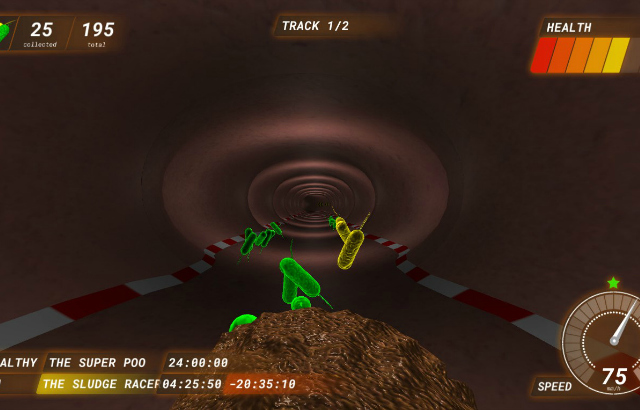 Both games have been installed at Centre of the Cell, an innovative science education centre based in QMUL’s Blizard Institute in Whitechapel.

Poo Racer challenges players to guide their poo vehicle out of the bowel in a healthy time while collecting bacteria points, making prudent food pitstops and avoiding obstacles. The game has been developed to tackle the stigma around poo which can result in bowel patients avoiding doctor appointments and hiding their bowel related symptoms. In some cases these symptoms are indicative of bowel cancer and if reported early enough may prevent disease developing.*

Carla Brown, Content Developer for Poo Racer, said: “As a nation, we need to change our attitude towards poo. This smelly, brown substance is simply our undigested food, some hitchhiker gut bacteria along for the ride, water and some lubricating mucus for your poo vehicle. Basically poo is normal and the gut is an awesome, multi-functional organ involved in immunity, brain function, stress and digestion.”

She added: “Poo Racer has the potential to have a great impact on society’s attitude towards bowel health as it demonstrates poo and bowel function in a light-hearted and engaging manner. This factor alone may be crucial in the well-being of bowel disease patients who express difficulty in finding suitable vocabulary to discuss their symptoms with friends and medical professionals.”

The game was created in partnership with Professor Charles Knowles’ team at the National Centre for Bowel Research and Surgical Innovation (NCBRSI) and programmer Martin Rees.

Natasha Stevens, Senior Research Programme Manager at NCBRSI, said: “Bowel disorders such as incontinence and constipation affect about 20 per cent of adults and children in the UK. These problems can have a big impact on a person’s quality of life and can be difficult to talk about. The Poo Racer game has been developed to educate children about how to prevent bowel problems through healthy lifestyle choices but also to make it easier to talk about and seek treatment for bowel problems that may occur for other reasons.” 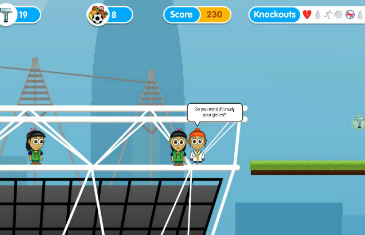 Centre of the Cell’s second new game, Gene Quest, puts the player in the shoes of a scientist exploring east London looking for people with genes that may hold the clue to curing illness. It was developed in partnership with East London Genes & Health which is one of the world’s largest community-based genetics studies, aiming to improve health among people of Pakistani and Bangladeshi heritage by understanding more about the nature of disease in those communities. In addition to teaching the science behind genes and health, GeneQuest also explores ethical issues, including the importance of obtaining consent from study participants before taking DNA samples.

Fran Balkwill, Director of Centre of the Cell, said: “Both of these brilliant games showcase the innovative ways everyone at Centre of the Cell aims to engage with the public about QMUL’s research and increase awareness about serious health issues while always keeping things fun. Hopefully they will inspire young people to take an interest in science and in the case of Gene Quest it will help feed back into the research done with East London Genes & Health.”

You can find out more about Centre of the Cell and book a Pod visit to play these games at www.centreofthecell.org

* Bowel cancer is the second most common cause of cancer death in the UK (2012), accounting for 10 per cent of all deaths from cancer. Nearly 16,000 men and women die of bowel cancer every year in the UK.