Arthritis patients could one day benefit from a novel form of medicine, according to researchers at Queen Mary University of London (QMUL). Their early study indicates that arthritic cartilage, previously thought to be impenetrable to therapies, could be treated by a patient’s own ‘microvesicles’ that are able to travel into cartilage cells and deliver therapeutic agents. 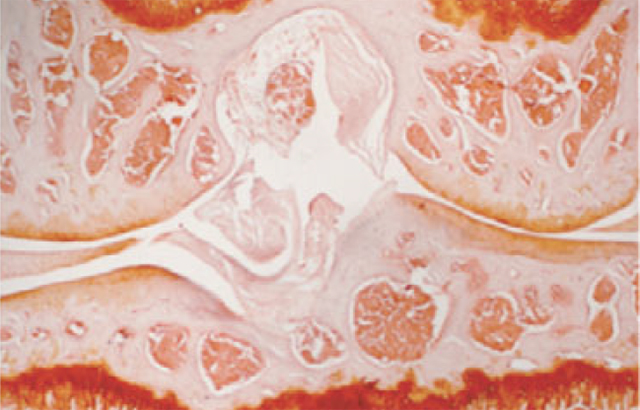 Fluid in human joints is rich in cartilage-protecting microvesicles

Microvesicles are very small subcellular structures (0.05 to 1 micrometer in diameter) that consist of fluid enclosed by a membrane. They are released by cells in copious numbers to transfer lipids and proteins to target cells, yet their role in disease has been poorly understood.

Some white blood cells’ microvesicles tend to accumulate in large numbers in the joints of rheumatoid arthritis patients. The biological impact of these microvesicles has been intriguing to researchers, because they are known to contain over 300 types of protein that vary in different situations.

Lead author Professor Mauro Perretti from QMUL’s William Harvey Research Institute said: “Cartilage has long been thought to be impenetrable to cells and other small structures, leading to strong limitations in our abilities to deliver therapies for arthritis. To our surprise, we’ve now discovered that vesicles released from white blood cells can ‘travel’ into the cartilage and deliver their cargo, and that they also have a protective effect on cartilage affected by arthritis.

“Our study indicates that these vesicles could be a novel form of therapeutic strategy for patients suffering from cartilage damage due to a range of diseases, including osteoarthritis, rheumatoid arthritis and trauma. Treating patients with their own vesicles may only require a day in hospital, and the vesicles could even be ‘fortified’ with other therapeutic agents, for example, omega-3 fatty acids or other small molecules.”

The study, published in Science Translational Medicine and funded by Arthritis Research UK, the Nuffield Foundation (Oliver Bird Fund) and the Wellcome Trust, examined the role of microvesicles in mice models and human cartilage cells, investigating their effect on experimental arthritic disease.

Mice were genetically modified to have reduced vesicle production. These mice exhibited cartilage damage from inflammatory arthritis, but showed reduced cartilage degradation when treated with microvesicles. The microvesicles were also found to lead to cartilage protection when repeated in human cells.

The researchers additionally found that one particular cellular receptor, known as ‘FPR2/ALX’, played a role in protecting cartilage tissue and could therefore be targeted by new small molecules for the treatment of cartilage erosive diseases.

Arthritis Research UK's Medical Director, Stephen Simpson said: “By using the body’s own transport system to get new and current therapeutic agents directly into the cartilage, holds the promise that we will be able to reduce joint damage more effectively than ever. A healthy and intact joint results in less pain and disability improving the quality of life of millions of people living with arthritis in the UK.”

The authors say that these early results reveal a possible new therapeutic approach for treating damaged cartilage of arthritic joints. Further studies in humans will be needed to confirm the therapeutic potential of the new approach.