A world expert in antennae and electromagnetics from Queen Mary University of London (QMUL) has been awarded a prestigious £300,000 international prize from the Institution of Engineering and Technology (IET). 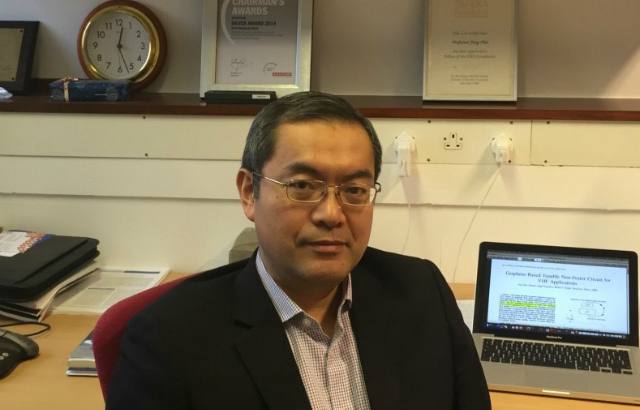 Professor Yang Hao from QMUL’s School of Electronic Engineering and Computer Science has today (Wednesday 25 November) been announced as the winner of the £300,000 IET A F Harvey Engineering Research Prize as a result of his outstanding contributions in the fields of microwave, antennas and electromagnetics.

The Prize will help Professor Hao develop his research ‘Tailoring Microwave Antennas using Smart Materials via Transformation Optics’ which is focused on developing a new generation of antennas with better aesthetics and fundamentally novel designs. This could allow them to be used in new and exciting ways, particularly in satellite communications and the aerospace industry.

One of the long-term aims for Professor Hao’s research is to develop advances in communications that can deliver faster, cheaper mobile phone charging and widespread availability of mobile coverage whilst on board aircraft. His work is likely to result in streamlined antennas, which could in future be integrated into mobile phones, improving network coverage. They could also spell the end of satellite dishes, with the next generation of antennas instead being built into the smart homes of the future.

Professor Hao said: “The IET A F Harvey Engineering Research Prize will enable us to take our work a step further, out of the lab towards real engineering applications and industry.

“We want to make smarter but lower cost antennas, an engineering reality that can be enjoyed by everyone, from those working in satellite communications within the aerospace industry, to people who travel regularly by aeroplane and would like to be able to use their mobile phone seamlessly throughout their flight.”

Sir John O’Reilly, Chair of the IET’s Selection Committee for the Prize, said: “Professor Hao is awarded the Prize in recognition of his research achievements in microwaves, antennas and, in particular, metamaterial antenna innovations drawing inspiration from transformation optics. We hope the Prize will become a springboard for propelling Professor Hao's research to even higher levels, while providing distinct economic benefits to his partners and to society in general.”

Professor Hao will give a talk about his research at the IET A F Harvey Prize Lecture on Thursday 17 March 2016 at the IET in central London. For more information, please visit www.theiet.org/harvey.