Physicists from QMUL, members of the ATLAS experiment and participants in the 2012 discovery of the Higgs boson particle, are gearing up to analyse new data from the Large Hadron Collider. 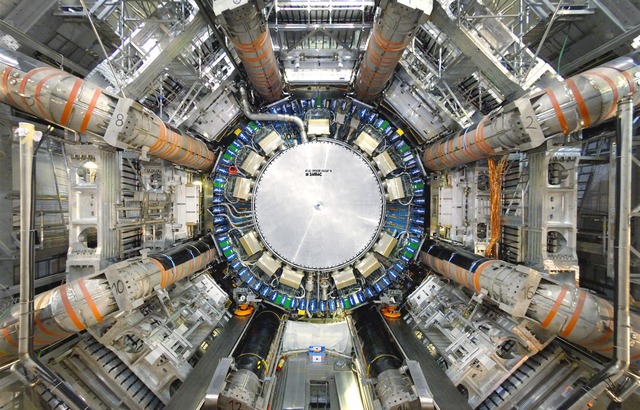 After a two year shutdown for repairs and upgrades the Large Hadron Collider (LHC) restarted over the Easter weekend for the first time since the discovery of the Higgs boson particle. Beams of protons have successfully been injected into the LHC and steered around the 27 km circumference accelerator complex located in Geneva under the French-Swiss border. This marks the start of what is being called ‘Run-2’, a three year physics run in which colliding proton beams break records again, and are accelerated to almost twice the beam energy, significantly increasing the discovery potential of new physics and in testing the properties of the new Higgs boson.

Using data from the first round of LHC experiments, members of the Particle Physics Research Centre (PPRC) at QMUL have lead publications with new results on the study of rare decays of particles sensitive to new physics, high precision determinations of the quark and gluon structure of the proton, studies of the top quark, and searches for extra spatial dimensions and quantum gravity effects. In addition PPRC physicists have used the shutdown to improve the ATLAS detector so that it is now capable of selecting which particle collisions to record every 25 nanoseconds and have increased the precision with which the trajectories of particles are measured after collisions.

These and other improvements to the detector will help to increase understanding of the Higgs boson, and assist the search for new particles and new fundamental interactions not predicted by the Standard Model of particle physics. The new data could tell us what dark matter is and why the Big Bang created more matter than anti-matter.

The LHC will now commission the beams gradually ramping up the energy and intensity and first data is expected to be recorded for analysis in June. QMUL is hosting a conference for those working on all of the of LHC experiments in September this year. The week long meeting is expected to be one of the first places where results from ‘Run-2’ will be announced.