Scientists led by Queen Mary University of London (QMUL) have developed a new type of synthetic bone graft that boosts the body’s own ability to regenerate bone tissue and could produce better outcomes for patients. 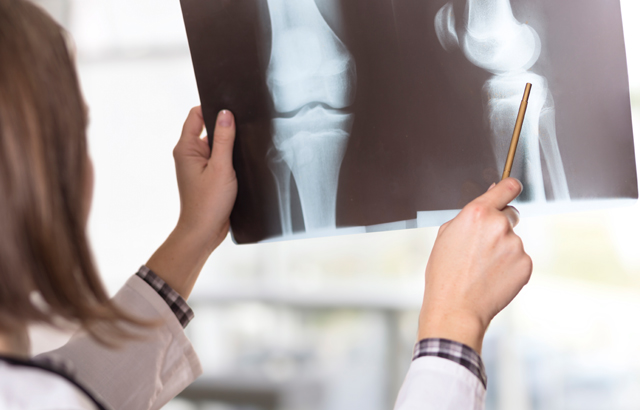 The research, which is published in the Journal of Materials Science: Materials in Medicine today (Friday 18 December) found that the new type of graft called Inductigraft was able to guide bone tissue regeneration in as little as four weeks.

Researchers from QMUL’s School of Engineering and Materials Science (SEMS) manipulated the pore structure of the graft to mimic natural bone tissue.

“Our challenge is to develop a graft that’s as clever as bone. For this synthetic graft, we looked at the mechanics of how bone adapts to its environment and changed both the chemical and physical composition of the graft, specifically how the holes within the structure are placed and interconnected,” said Dr Karin Hing, co-author of the study and Reader in Biomedical Materials at QMUL’s Institute of Bioengineering, part of SEMS.

By eight to twelve weeks its performance alone matched that of the new graft mixed with the clinical gold standard, called autograft, which is made up of the patients’ own bone containing living cells and growth factors.

Dr Hing added: “This new study has real implications for anyone suffering from any sort of skeletal injury, and for surgeons in particular. At the moment the preference is to use the patients’ own tissue to create or enhance bone grafts, however our results show that Inductigraft can be just as effective, with the advantage that patient doesn’t have to undergo additional surgery to harvest the autograft.”

This work builds upon previous research conducted at QMUL where the graft chemistry was enhanced by introducing silicate into hydroxyapatite, a traditional synthetic substitute material containing calcium and phosphate, which is chemically similar to natural bone mineral. In previous studies, scientists found the combination of optimised chemistry and pore structure was better at guiding cells to differentiate into cells that produce bone tissue, both in the laboratory and in the body.

Further research examining the mechanism of action by which Inductigraft is able to guide bone formation is currently underway and is funded by EPSRC and ApaTech Ltd, a spin-out from QMUL. Based on over a decade of research at QMUL, award-winning spin-out ApaTech was bought by healthcare company Baxter International £220m in 2010.

Watch Dr Hing describe how her research is addressing a clinical need for a good, reliable bone graft substitute.