New evidence that tyrannosaurs fought and ate each other

Examination of a Daspletosaurus skull by Dr David Hone of the School of Biological and Chemical Sciences found signs that it had been bitten by another tyrannosaur during its lifetime as well as after it had died. 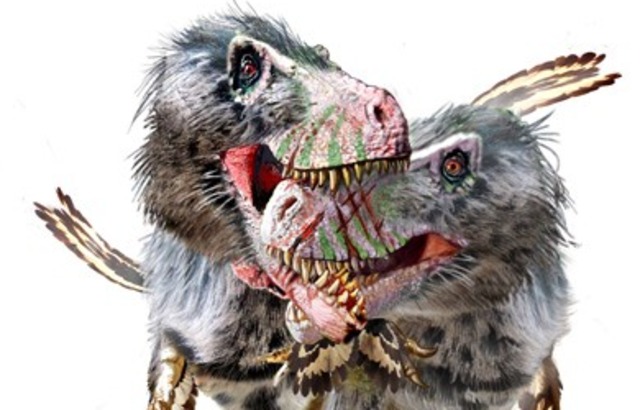 The results show that the skull of a type of tyrannosaur called Daspletosaurus suffered numerous injuries during life, at least some of which were likely inflicted by another Daspletosaurus. It was also bitten after death in an apparent event of scavenging by another tyrannosaur. This provides evidence of combat between two large carnivores as well as one feeding on another after death.

Daspletosaurus was a large carnivore that lived in Canada and was only a little smaller than its more famous cousin Tyrannosaurus. Like other tyrannosaurs it was most likely both an active predator and scavenger. The individual in question, from Alberta Canada, was not fully grown and would have been just under 6 metres long and weighed around 500kg when it died.

Researchers found numerous injuries on the skull that occurred during life several of which are close in size and shape to the teeth of tyrannosaurs. Indications of healing on the bone’s surface mean that these injuries were not fatal and the animal lived for some time after they were inflicted.

Lead author Dr David Hone, a lecturer in zoology at QMUL, said: “This animal clearly had a tough life suffering numerous injuries across the head including some that must have been quite nasty. The most likely candidate to have done this is another member of the same species, suggesting some serious fights between these animals during their lives”.

There is no evidence that the animal died  was killed another tyrannosaur but it’s thought that after the specimen began to decay a large tyrannosaur bit into the animal and ate at least part of it.

Combat between large carnivorous dinosaurs is already known and there is evidence for cannibalism in various groups, including tyrannosaurs. This is however an apparently unique record with evidence of both pre- and post-mortem injuries to a single individual.

Unusually, this project was made possible via crowdfunded fundraising though the website Experiment.com. Numerous donors contributed to the project allowing the work to be carried out and as a result, publication of the paper in the Open Access journal PeerJ, means that these exciting new results are now fully open to the public, who can read them without restriction.