Early results from the Rosetta spacecraft mission’s Philae lander, which successfully landed on a comet 67P/Churyumov-Gerasimenko last year, have been published in the journal Science. 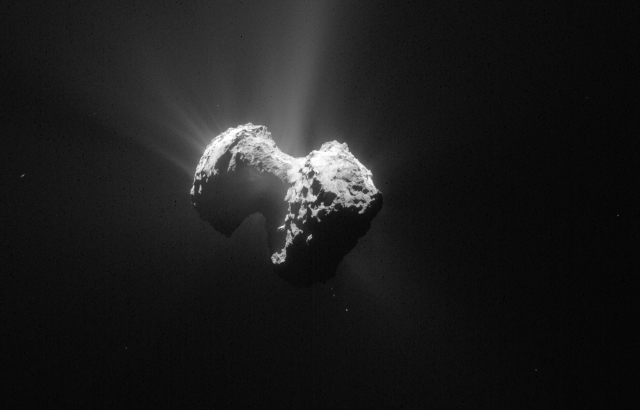 QMUL’s Professor Iwan Williams has been working on the European Space Agency (ESA) project since the 1980s and explains that for the first time radar has successfully been used to investigate the deep interior of a solar system body.

The researchers have discovered that the composition of the comet is largely as expected, though a lot of data remains to be looked at.

The head of the comet appears to be homogeneous, that means there are no lumps of rock with sizes of tens of metres, while the permittivity is towards the low end of what might have been expected, but is within the normal range for comets.

Additionally dust on the comet might be similar to carbonaceous chondrites, a type of meteorite, but this is not unexpected.

The researchers were able to discover this thanks to The Comet Nucleus Sounding Experiment by Radiowave Transmission (CONSERT) which Professor Williams worked on as an investigator. CONSERT sends electromagnetic signals between the orbiting Rosetta spacecraft and the lander, Philae. Part of the signal then travels through the comet and the CONSERT measurements give direct information about the permittivity of the comet nucleus and its spatial structure.

Last year the Philae lander ran into a bit of trouble after it bounced a few times before coming to a rest on the surface of the comet. However the team has pinpointed a relatively small area where it is located.

Professor Williams said: “We have narrowed down the area where Philae might be down to an area of 34x21 square meters, smaller than an Olympic swimming pool.”

He added: “This is an incredible achievement but we still have a lot of complex data to analyse from CONSERT because the final position of Philae was initially unknown.

“The discoveries made by this mission will help shed light on comets that date back to the origins of the Solar System.”

In total, data was collected by ten instruments including a camera which revealed that the terrain in the vicinity of Philae's final landing site is dominated by dark clumps that are probably large grains made up of organic compounds. It is believed the introduction of such grains into planetary oceans could have led to the emergence of life.

For more information on Professor Williams’ involvement in the project click here: /qmpublic/media/news/items/se/144735.html