Fallow deer are all about the bass when sizing up rivals

Research published in the journal BMC Evolutionary Biology, has found that fallow deer bucks make judgements about the possible threat from competitors from the sound of their calls. 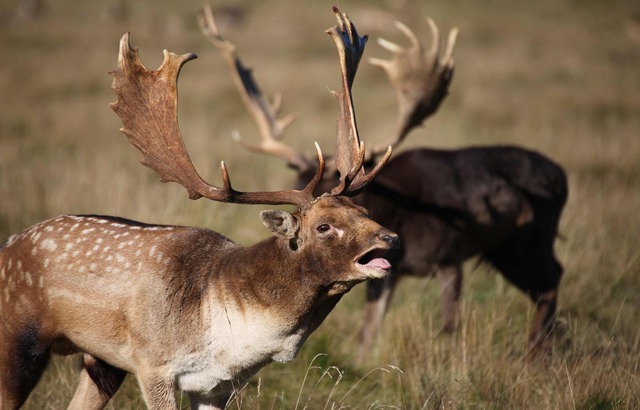 During the deer’s breeding season, or rut, the researchers from Queen Mary University of London (QMUL) and ETH Zürich, played male fallow deer (bucks) in Petworth Park in West Sussex, a variety of different calls that had been digitally manipulated to change the pitch and length and analysed their responses. The bucks treated lower pitched and longer calls as more threatening, by looking towards source of the call sooner and for longer, than others.

Fallow bucks attracted the attention of the researchers because of their intriguing calling behaviour. Males are silent for most of the year, but call intensely for the brief period of the rut. Bucks pull their larynx towards their chest when they call, lengthening their vocal tract and deepening their calls. Bucks also call faster and have lower pitched calls than their larger cousins, red deer.

Larger and more dominant fallow bucks tend to make lower frequency calls. As animals become tired from competing for mates their calls become shorter and higher frequency. The researchers found that the bucks are able to hear subtle differences and make judgements about the level of competition they might face from the caller.

While humans would struggle to hear the differences in the deer’s calls, we do make judgements about each other based on the pitch of our voices. Studies cited by the researchers showed that men perceive others with lower voices as being more physically and socially dominant.

“Deep calls help to beat other males in the quest for mates, and over generations competition between males for mates has driven the evolution of deeper, lower pitched and longer calls.

“Just like humans, fallow bucks can listen to the sounds of a rival’s voice and assess if they are dominant or pose a threat.

Dr Alan McElligott, from QMUL and co-author of the study, said:

“This is the first time we’ve been able to see in experiments the importance of the pitch of calls to competition between males in a non-human mammal.

“The differences in call are subtle but they clearly mean a lot to the bucks that hear them. Bucks get into a lot of confrontations during the annual rut and being able to tell from a distance how big and how fresh another buck is might help them avoid being on the end of an unnecessary beating.”