An interdisciplinary team of five students from QMUL’s PhD programme in the School of Electrical Engineering and Computer Science will travel to Mumbai to present their ideas after winning a competition to design a system that integrated plants and social media to promote sustainable communities. 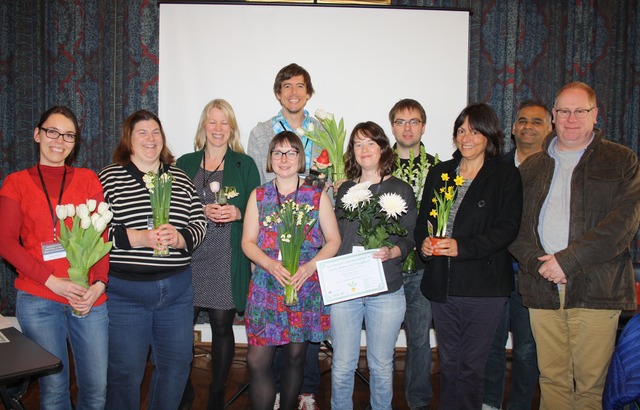 The Symposium and Hackathon in Social Media and Interaction, was organised by Swansea University and took place on 23 and 24 March at Cambridge University. Participants were asked to develop a system that encouraged people using a shared space to achieve a common goal. They were given a Raspberry Pi credit-card sized computer and an Arduino microcontroller as well as a range of sensors and other parts, and crucially, a range of plants from which to develop their response.

The PhD students – Dmitrijs Milajevs, Pollie Barden, Shauna Concannon, Sophie McDonald and Katja Knecht – chose to develop a networked communal watering system for a shared garden in a residential tower block. Each resident has a plant in their own home and when this is watered it triggers a pump to water a corresponding plant in the shared garden, and visa versa. When residents are watering their plants, the plants in the communal garden respond with their own sounds being triggered, generating a soundscape. Residents also receive messages on Twitter from their plants to share information and give tips.

They system is designed to encourage city dwellers to have greater interaction with nature and to create an opportunity for those living closely together to act communally.

The team, who were supported by the Media and Arts Technology Programme, the Cognitive Science Research group, the Theory group, and the Centre for Digital Music, won the competition and with it the opportunity to travel to the IIT Mumbai Industrial Design Centre to present their ideas.

The team stated: “Apps and other networked technologies can often leave out the human component but approached thoughtfully they can bring people together in new and exciting ways. Social hackathons, like this one hosted by the University of Swansea, are a great opportunity to challenge unusual problems inventively.

“The communal nature of our project is a reflection of the benefits of the bringing together the variety of skills, and knowledge from each of our research areas to tackle everyday human problems.