A piece of music based on the work of First World War poet Isaac Rosenberg, who grew up in east London, is to premiere at Queen Mary University of London (QMUL). 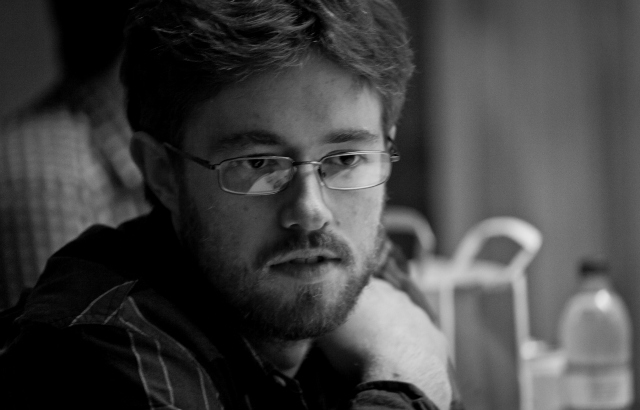 Strange Joy is a new piece by Edward Nesbit, QMUL’s Composer in Residence, and will be performed by the East London Music Group on 24 November 2015. It is based on three Rosenberg poems: On Receiving News of the War, Break of Day in the Trenches and Returning, We Hear the Larks.

Rosenberg, whose family moved to east London in 1897 when he was seven years-old, was the son of Lithuanian Jewish immigrants. He attended schools around Stepney until the age of 14 when he went to work as an engraver but by 1911 he enrolled at the prestigious Slade School of Art as a painter. He released several collections of poems and while at The Slade he formed the Whitechapel Group consisting of artists and writers including David Bomberg and Mark Gertler.

Edward Nesbit said: “I am delighted to be starting my residency at QMUL with a commission from the excellent East London Music Group. It has been a particular pleasure to set poetry by the First World War poet Isaac Rosenberg, whose local connections to east London make his striking poems even more directly relevant to us.”

The piece will be part of a concert on the night in which the East London Music Group will also perform a new production of Façade by William Walton, and the QMUL Chamber Ensemble will perform works by Edward Elgar, Ralph Vaughan Williams, and John Ireland.

Matthew Hardy, Artistic Director of East London Music Group, said: “It is very exciting for us to be premiering a new work by Edward Nesbit. Ed is a talented and thoughtful composer, with an incredibly distinctive voice. We’re very much looking forward to returning to QMUL, and contributing once again to the excellent musical scene which is growing there.”

Paul Edlin, Director of Music at QMUL, added: “The vibrant new ensemble, East London Music Group, gave one of the most outstanding imaginable performances of Stravinsky’s The Soldier’s Tale at QMUL earlier this year. Their engagement with our students is extremely positive and it’s wonderful to see our relationship develop and flourish”.

The concert will start at 7.30pm on 24 November in the Octagon at the Mile End campus of QMUL, Mile End Road, E1 4NS. Tickets are priced at £5 (£2 concessions) and can be purchased on the door or online at www.eastlondonmusicgroup.co.uk/events/facades. There will be an interval in which refreshments will be available, and the concert will be finished by 9.30pm.

Strange Joy is composed for six musicians, and the poems will be recited by actor Joseph Hardy.