Queen Mary University of London (QMUL) has officially launched its Confucius Institute, in partnership with Shanghai University of Finance and Economics (SUFE) and Hanban, the Chinese National Office for Teaching Chinese as a Foreign Language, which is responsible for promoting Chinese language and culture abroad. 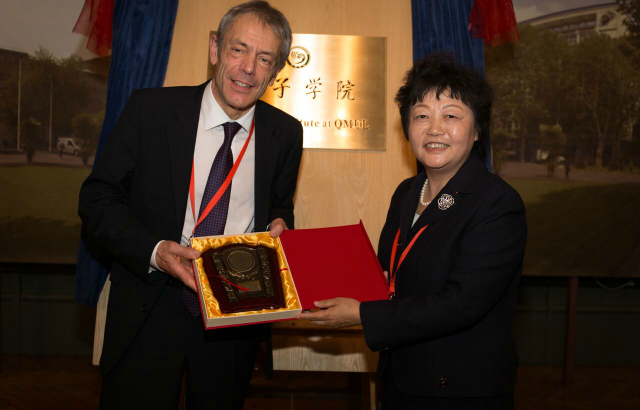 QMUL Confucius Institute’s launch ceremony, which took place at the university’s Mile End campus on Friday 23 October, kicked off with demonstrations of Chinese culture.  A dance performance by QMUL’s Chinese Dance Society was followed by a Pipa (traditional Chinese musical instrument) recital by QMUL alumna Shumeng Jiang, and an operatic performance by Chinese soprano He Wu, who currently sings with the Royal Opera House.

The ceremony also featured speeches by Professor Simon Gaskell, President and Principal of QMUL and Professor Fan Liming, President of SUFE, and an address by Madame Xu Lin, Director General of Hanban.

Professor Simon Gaskell said: “The Confucius Institute at Queen Mary marks an important first step in our relations with Shanghai University of Finance and Economics, we hope to be able to add more steps to our partnership and extend our collaboration over the coming years.”

Following the official opening of the QMUL Confucius Institute, gifts were exchanged between the institutions involved. Mr. Shen Yang, Minister Counsellor for Education at the Chinese Embassy in London, also presented the university with a gift.

The QMUL Confucius Institute was established in September 2015 with support from Hanban. It aims to facilitate student and staff exchanges, academic collaboration and joint research, provide courses in Chinese Language and Culture, and promote collaborations in the areas of finance and economics.