Four Honorary awards – among the most significant accolades that can be offered by a university - were presented at QMUL’s Graduation ceremony on July 13 and 14. 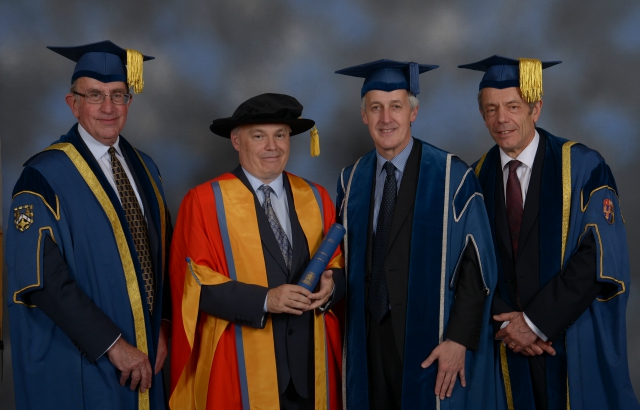 Awardees included Sir Sam Everington, an honorary fellow, who works as a General Practitioner in east London and is well known for his courageous campaigns for social justice which continue the proud history of medically qualified reformers working in the vicinity of QMUL.

His General Practice in Bromley by Bow focuses on community engagement, and for years undergraduate medical students from QMUL have been able to experience approaches to whole person medicine to which the wider GP community is just beginning to aspire.

More recently, he has been Chair of the Tower Hamlets Clinical Commissioning Group (CCG), which commissions services from Barts Health NHS Trust. In this role it has a crucial influence on the clinical learning environment of QMUL medical students.

Sir John Chisholm was also made an honorary fellow and is Executive Chair of Genomics England, headquartered at QMUL’s Charterhouse Square campus since 2013.

Sir John is known for transforming the government’s defence research laboratories into a commercial organisation, which led to the development of the internationally successful technology services company known as QinetiQ Group plc, of which he became Chairman in 2006. He was also asked to take the Chair of the Medical Research Council that year. He retired from QinetiQ in February 2010.

His current work for Genomics England is to bring the benefits of modern genome sequencing technologies to 100,000 NHS patients with rare severe diseases, cancer and infectious disease. This, alongside other large genome projects at QMUL, puts the university at the forefront of modern healthcare genomics.

Professor Dame Sally Davies has made an enormous contribution to clinical research through the National Institute for Health Research (NIHR) and was made an honorary fellow. At QMUL her NIHR strategy enabled the university to win two successive Biomedical Research Units and a Collaboration for Leadership in Applied Health Research connecting research in the laboratory directly to clinical investigation in patients.

She also played a pivotal role in the creation of Genomics England to deliver the 100,000 Genomes Project and agreed for QMUL to host this important national NHS transformation programme. This created a platform for 90 per cent of the university’s medical researchers to be independently rated as world-leading or internationally excellent in the 2014 Research Excellence Framework (REF).

Professor Joanne Tompkins was also made an honorary graduate and awarded the Doctor of Letters (DLitt). She has published widely on drama and theatre including the book Theatre’s Heterotopias: Performance and the Cultural Politics of Space (2014), much of which was shaped by her time as distinguished visiting fellow at QMUL in 2008.

At the University of Queensland, she has been Head of the School of English, Media Studies and Art History, and is currently Associate Dean (research) in the faculty of Humanities and Social.