Game on! Centre of the Cell holds its first game development workshop for young science communicators

Centre of the Cell opened its doors to a group of young Londoners to run a full day of game development activities. Twelve 14-18 year olds were invited to evaluate existing games, test new games in the making, and even come up with some game ideas of their own. 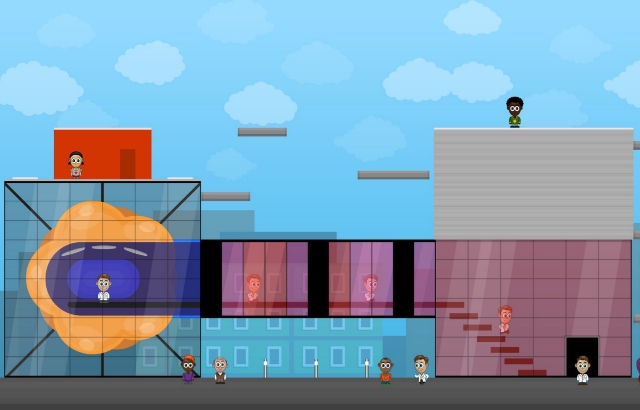 Games are a key component of Centre of the Cell, an innovative science education centre located in QMUL’s biomedical labs in Whitechapel. Inside the Centre’s Pod, visitors can watch films and play games that explore the world of cells, the human body and medical research.

Centre of the Cell Learning and Access Manager Liz Danner explained why the game development day was so valuable: “We’re always looking for innovative ways to make our games better and for new opportunities for our youth members. With three new games in development, we decided to organise an event where budding science communicators could play our games, provide their feedback and learn about the process of designing science games, all while developing their own skills.”

The group began by discussing the strengths and weaknesses of Centre of the Cell’s current games and came up with ideas for what they thought made a great science game. Three suggestions included: 1) a science game should link science with a well-known and simple game, 2) it should be suitable for all ages and 3) it should encourage competition between players.

Having considered what they thought made a science game effective, the afternoon kicked off with a game development training session run by Content Developer, Carla Brown. She said: “I wanted to show the group exactly what my job entails, so I asked them to work in teams to design a game based on the research of a group of scientists who are working on antibiotics produced by bacteria. The teams had 20 minutes to translate the complex science into a simple and effective game. Each team made storyboards and designs for their games - Biogun, Stressed Out and Battle of the Germs - which they successfully pitched to us, Dragon’s Den style!”

Next up the teenagers were invited to test out three new games being installed in the Pod later this year, which are all at different stages of development.

Carla is working with Professor Charles Knowles’ group at the Centre of Digestive Diseases and has devised a poo race game ‘Gut feeling’ which aims to educate players about faecal incontinence and bowel health. “I showed the group early video footage of ‘Gut feeling’ and due to the skills learned during the workshop, they were able to identify key areas for improvement,” she said. “Two examples of this included changing the point system to increase player motivation and increasing the number of ‘bowel obstacles’. After having their ideas assessed, I think they really enjoyed getting into the role of critic.”

Centre of the Cell content developer Elise Allthorpe-Mullis is working with East London Genes & Health, one of the largest community-based genetic research studies in the world, led by Professor David van Heel. She said “My game puts the player in the shoes of a scientist exploring East London looking for people with genetic knockouts. I’m in the later stages of game development, so the group were able to play a digital prototype. It was great to see them getting excited about the game, they gave me a lot of feedback about the design, game-play and scoring system, which I have started to incorporate into the next prototype, and they even spotted a few software bugs.”

Dr Gioia Mosler, who works as Learning and Outreach Officer for Centre of the Cell and the School-based Asthma Project, a project run by a team of QMUL researchers studying asthma in young people, said: “I am developing a game about asthma that will form part of a self-management workshop for young asthma sufferers. The game teaches players about general topics related to asthma, such as asthma triggers, and also educates them about the importance to regularly use preventer inhalers in order to prevent symptoms. The game is currently a board game version, which the group played with great enthusiasm. Afterwards almost all of the players had learnt what a preventer inhaler is for and how often to use it. The young game developers gave me some really valuable feedback including some great name suggestions; ‘pumps versus triggers’ and ‘asthma chase’ were among my favourites. Their comments will be extremely valuable to give the board game the final touches before we play it with young asthma sufferers.”

Throughout the day the youth members learned how to turn complicated science into enjoyable games, they identified effective strategies on how to communicate science, and finally through this they found the confidence to communicate their own ideas to our staff. By the end they really were a great group of science communicators.