Carla Valentine, technical curator at Barts Pathology Museum, has won the Major Contribution to the Understanding of Death Award at the Good Funeral Awards 2015 thanks to her work engaging with the public. 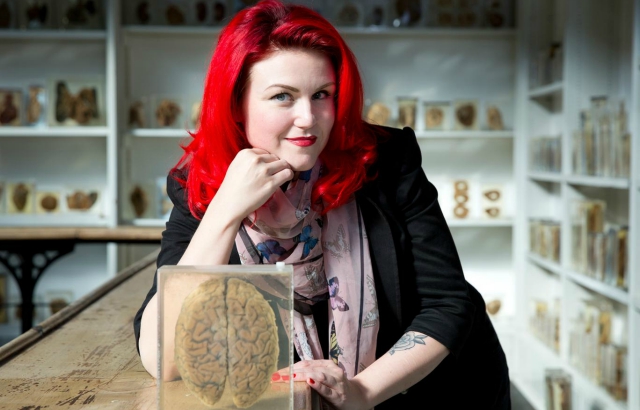 She was presented with the coffin-shaped award at the “Oscars of the UK funeral trade” by actor Ian Lavender who is best known for his role in Dad’s Army.

The ceremony, held at the University of Winchester on 5 September, celebrates excellence in the funeral industry and those people who do outstanding work for the bereaved.

Carla said: “Winning the award is a wonderful recognition of the work I’ve been doing engaging the public with death and pathology at Barts Pathology Museum and through other projects. Although the organisers jest that The Good Funeral Awards are “The Oscars of the death professions” the reality is they are the only ones of their type in the UK and it really is an honour to receive one!”

Nominations are submitted by the general public and then offered to the judges for verification, and a shortlist is drawn up.

Barts Pathology Museum’s seminar season starts on 30 September with a talk on the scent of fear. Click here for the full list of upcoming events at the Museum.