In recent decades, commentators and academics have become increasingly concerned over the decline in both trust and social capital in many communities in the United States. While research has shown that race and income diversity tends to be associated with lower levels of social capital, Andrea Tesei takes a closer look, examining the relationship between trust, income inequality and racial diversity. 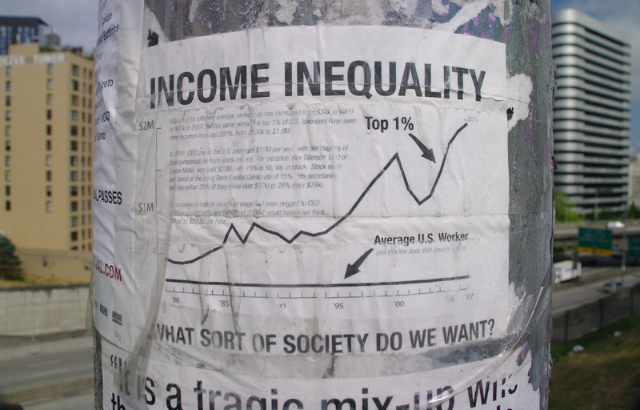 By studying survey responses on trust from 110 metropolitan areas from 1973 to 2010, he finds that racial income inequality decreases trust within communities, and that this lack of trust is exacerbated when communities are more racially fragmented and as this inequality increases.

During the last decade, policy-makers and scholars alike have become increasingly concerned about the social and economic effects of income inequality and racial diversity in the United States. One crucial concern is that diversity – both in race and income – seems to be associated with lower levels of social capital in society. Inhabitants of diverse communities, in particular, tend to withdraw from social life, participate less in collective activities, and trust their neighbours less. Since these dimensions of social life are considered key lubricants of the economic activity, the findings have spurred a public debate about the workings of the American melting pot.

Perhaps surprisingly, the debate has focused almost exclusively on the independent effects of income inequality and racial diversity, overlooking the fact that much of the income inequality in the US has a marked racial connotation. Still in 2010, the median Black and Hispanic household earned, respectively, only 58.7 per cent and 69.1 per cent of that of the median White household.

Figures 1 and 2 help to illustrate the point. Figure 1 plots the average level of trust reported by citizens of 110 different U.S. metropolitan statistical areas (MSA), against the average level of racial diversity and income inequality in their MSA. The figure clearly corroborates previous studies, by showing that trust is lower in more racially diverse and income unequal communities. However, it also makes clear that racial diversity and income inequality alone cannot fully account for the difference in trust between similar cities, like San Francisco and Houston. In spite of their almost identical levels of racial diversity and total income inequality, citizens in the two cities have very different levels of trust: while 40 per cent of those living in San Francisco say they can trust others, only 31 per cent in Houston do so.

The explicit focus on racial income inequality helps to understand this difference. Figure 2 now shows on the horizontal axis the share of total income inequality due to differences between racial groups. Under this dimension, the two cities turn out to be actually very different. The share of total inequality due to differences between races is twice as large in Houston as in San Francisco. This in turn is related to the level of trust in the two cities. In San Francisco, where the probability of meeting an individual of a different race but similar income level is relatively high, the level of trust is higher than in Houston, where belonging to a different race is also likely to be associated with a difference in income.

This same pattern of apparent similarity, which is in reality masking an additional dimension of heterogeneity, is repeated over different pairs of cities in the US My empirical analysis documents the pattern in a systematic way, exploiting answers from 20,000 respondents to the US General Social Survey (GSS) between 1973 and 2010. The survey contains a variety of indicators on the respondents’ political views, social behavior and socioeconomic characteristics. Crucially, it also asks respondents whether they think that most people can be trusted. I match their answers to this question to their socioeconomic and demographic characteristics, and to the level of racial diversity, total income inequality and racial income inequality in the MSA of residence.

I start out by showing that racial diversity and total income inequality have a statistically significant, negative effect on individual measures of trust, a result that is consistent with previous studies. But I then find that these effects become statistically insignificant once I account for the income inequality between racial groups, which instead remains negatively and significantly associated to the level of trust of the respondent.

I then show that the negative impact of racial income inequality on trust is larger in more racially fragmented communities, and that members of minority groups reduce their trust towards others more, when racial income inequality increases. These results are consistent with a simple framework in which individuals can be similar in both race and income, and trust towards others falls at increasing rates as individuals become different in both dimensions.

Overall, my results suggests that racial diversity is more detrimental when associated with income disparities between races and that, similarly, income inequality is more harmful when it has a marked racial connotation. This in turn suggests that policies aimed at reducing income disparities along racial lines might be particularly effective in increasing the level of social participation and trust in US communities.

Andrea Tesei is a Lecturer at Queen Mary University of London, based at the School of Economic and Finance. His research interests include economic development and political economy. His current research focuses on the impact of natural resource windfalls on democratisation processes; the influence of both traditional and new media on electoral results and mass mobilization; the effect of racial income inequality on the level of trust.