A QMUL student who can speak five different languages has won a Languages Undergraduate of the Year Award. 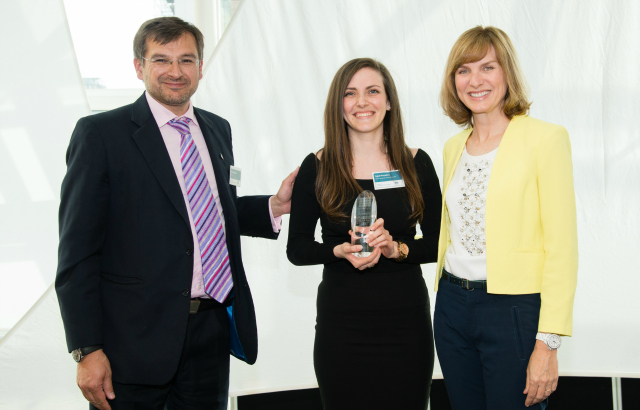 Aysel Kucuksu was announced as the winner at the TARGETjobs Undergraduate of the Year Awards - an annual competition which aims to find the best undergraduates in the UK - on Friday April 24, at East Wintergarden, in Canary Wharf.

Aysel, who is in her final year studying English and European Law, said she felt ‘extremely privileged to have won the award’ which was presented to her by BBC’s Fiona Bruce.

“I was running against some very exceptional individuals from all over the country and having spent time with them, I recognised the competition was really tough. The extensive application process also allowed me to appreciate the significance of the prize. There were six stages which tested numerous skills, so I really had to work for it,” she commented.

Her prize for the award, which was sponsored by EU Careers, is a VIP trip to visit EU institutions where her language skills will come in handy.

She added: “I did spend a year abroad in Denmark, and it has been the most valuable choice I have made during my degree. The opportunity to immerse into a different country's education culture is a remarkable experience I would recommend to anyone. I would do it all over again if I was offered the choice. Of course, I have always had a keen interest in foreign languages and so I dedicated a very big portion of my time abroad to learning Danish, which I can now speak fluently. I can also speak Bulgarian, Turkish, English, and Spanish - definitely my proudest achievement to date despite being as incommensurable as it is.”

And with graduation around the corner, Aysel is thinking ahead to her career and hoping to further the work she has been involved with at the Queen Mary Legal Advice Centre.

“As for the future, I would like to devote my life to improving access to justice and working with refugees, both at the grassroots and policy levels. The immigration work I have been involved with through the Queen Mary Legal Advice Centre has strengthened my determination to do so. Now, with a big part of the world's refugees coming from the Middle East, I have decided to embark onto learning Arabic,” she said.