Professor Michael Kenny, Director of QMUL’s Mile End Institute, has won the prestigious W.J.M Mackenzie Prize for his book The Politics of English Nationhood. The prize is awarded annually by the UK’s Political Studies Association (PSA) for the best book published in political science. 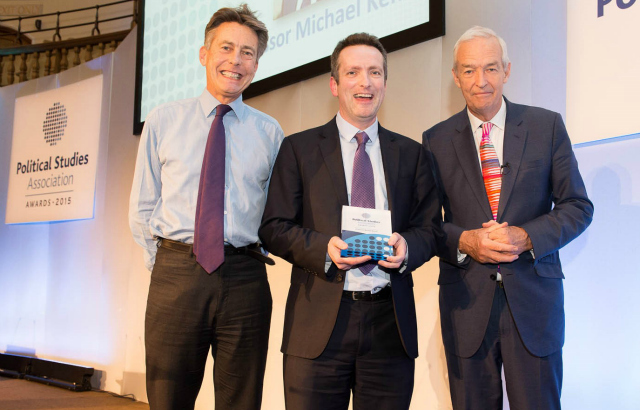 The book was the unanimous choice of the PSA’s adjudicating panel which consisted of a number of distinguished academics.

Professor Kenny was presented with the prize by Ben Bradshaw MP at the PSA annual dinner, held in London on 1 December 2015.

According to the jury: “Michael Kenny’s The Politics of English Nationhood is a deserving winner of this year’s WJM MacKenzie Book Prize. In a timely and insightful account, this book addresses the many confusions that exist concerning Englishness providing a nuanced and informative examination of why a myriad of complex meanings have arisen and how ‘the English question’ should be understood.”

They added: “The book claims it offers ‘a powerful challenge’ to prevailing orthodoxies – this is does, but it also reconstructs a more liberal and civic idea of multicultural England drawing on its political dimensions. An impressive piece of research with potentially far reaching impact on how we should think about a fundamental issue in contemporary politics.”

Professor Kenny’s research interests are primarily in the fields of modern political thought, political ideologies and the role of ideas in public policy. He has also published work on the position of intellectuals in Britain, the history of political science in Anglo-America, the politics of nationhood in the UK, political reform, and the use of the ideas of civil society in international politics.

Michael has written for a wide range of newspapers and magazines, and appears as a commentator on a variety of radio and television programmes.

In 2014, he was appointed the inaugural Director of the Mile End Institute.
Kenny’s other publications include; Reassessing New Labour: Market, State and Society under Blair and Brown (with P. Diamond in 2011), The Oxford Handbook of British Politics (with M. Flinders, A. Gamble, and C. Hay in 2005), The Politics of Identity: Liberal Political Theory and the Dilemmas of ‘Difference’ (2004) and The First New Left in Britain, 1956-64: British Intellectuals after Stalin (2010).