Inside Out and the democracy of the modern mind

Dr Thomas Dixon, Director of QMUL's Centre for the History of the Emotions, reviews Disney Pixar's Inside Out. 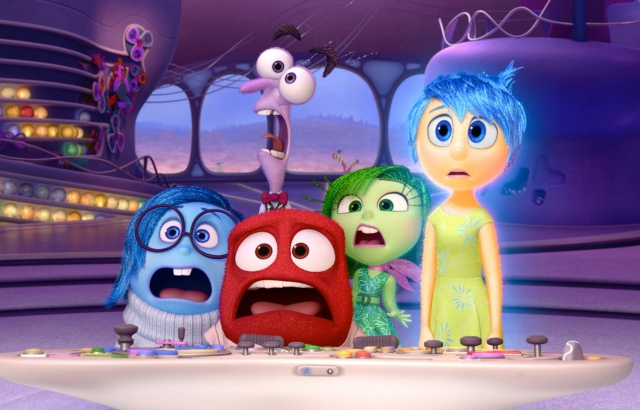 As we drove to our local cinema to see Inside Out, my five year-old son asked me: “So what is this film going to be about?” “Feelings,” I said, “the feelings that live inside our heads”. He thought for a moment, before replying: “That sounds pretty boring.” It’s true that I could have done better with the pitch, but the film held his attention, and mine, and gave us both a few laughs. While my son giggled at the good old-fashioned slapstick, I could chuckle knowingly at references to Freud, evolutionary psychology and the emotional turmoil of puberty.

Inside Out is the tale of 11-year-old Riley and her traumatic move from Minnesota to a new home in San Francisco. It’s a pretty run-of-the-mill story, but there’s a twist: it’s all seen through the eyes of the five emotions that control the girl’s mental life, from a console inside her brain. Riley’s mental steering committee is headed up by Joy at the start, but as the narrative unfolds, Joy, who has previously tried to keep the four more negative emotions – Anger, Fear, Disgust, and Sadness – away from the controls, gradually learns the special value and importance of sadness.

The psychological model used by the film is essentially the one already popularised with stunning success over several decades by the American psychologist Paul Ekman, the leading proponent of the theory that all human beings, regardless of their historical and cultural milieu, share a repertoire of identical “basic emotions”. Quite understandably for the purposes of an animated movie aimed at children, Inside Out simplifies things further still.

Ekman’s list of cross-cultural basic emotions is longer, including, in addition to the five in the film: contempt, surprise, shame, amusement, satisfaction, contentment and relief, among others. Ekman’s particular concern has been to show that there are certain innate facial expressions, whose emotional meaning can be discerned by anyone, regardless of their culture and education. In this special interest in the bodily and facial accompaniments of feeling, Ekman is a descendant of pioneer emotion theorists of the 19th century, including Charles Darwin and William James.

But the story of Inside Out is not a story of bodies and faces: it is much more inside than out.

Glowing glass bowling-ball memories, each with its own emotional hue, are handled and stored by the myriad helpers in Riley’s mind. That mind is visualised as a combination of the high-tech factory of dreaming and perception, the organic archipelago of personality traits, the vast storehouse of memories and the psychedelic soft-play area of the imagination.

The various regions are joined up by tubes and wires as well as the very literal “train of thought” railway. It’s a wonderful mess of mental metaphors, even including a dark subterranean unconscious, albeit one tame enough for a U certificate. But there’s more missing from Riley’s mind than emotional complexity, psychodynamic drives, or nascent sexuality.

What Inside Out reveals, beyond the obviously attractive simplicity of the idea of having just five basic emotions, is the triumph of a psychologised view of the self: one that lacks any ruling faculty. This is the epitome of the modern, democratised mind, a mind in which there is no higher authority than the collective but unguided outcome of a melée of sensations and feelings.

Whatever name and characteristics one might choose from the history of thought for a putative higher mental faculty, Riley’s mind lacks it: reason or intellect; conscience or reflection; will or love. All are missing. The role of abstract thought is reduced to one entertaining cameo.

Slave of the passions

Considering this, I would say Inside Out shows the influence more of the philosophies of Thomas Hobbes and David Hume than it does of the science of Paul Ekman. For Hobbes, the moralists’ faculty of the will was replaced by whatever happened to be the prevailing passion, while for Hume the divine power of reason was reduced to a mild emotion which was and ought only to be the slave of the other passions. I found the absence of either love or conscience as any kind of force in Riley’s mind to be the most striking.

“Honesty” is one of the several islands of her personality, but has no special role. Even in Darwin’s writings about the human mind, the faculties of love and conscience, evolved from earlier social instincts, were the most highly prized of all. When Riley steals her mother’s credit card and boards a bus to run away from home, her mental state is portrayed as dead and emotionless. Her change of heart comes about through an ability to articulate her sadness. She is saved, then, by a kind of advanced emotional literacy rather than by an attack of conscience or the power of love. This is the world according to a purveyor of emotional intelligence such as Daniel Goleman rather than a Victorian moralist like Charles Darwin.

Although the happy ending of the film is presented as being about the importance of recognising the emotion of sadness, in fact it is about the power of tears. This is not quite the same thing. The film’s explicit focus remains on the inner emotion, while the real action is in fact in the outward performance. It is the girl’s tears that have betrayed her in front of her classmates and caused her shame and dismay, but also her tears that reconcile her to her parents, restoring the bonds of familial sentiment that had become stretched and frayed.

As I wiped away my own tears, I asked my son what he thought of the film. “Good,” he said. I asked him what he thought it was about. “Feelings?”, he asked tentatively. “Can we go and play now?”

Dr Thomas Dixon a historian of philosophy, science, medicine, and religion, with particular expertise in the history of emotions. He directs the Centre for the History of the Emotions and edits the History of Emotions Blog at Queen Mary University of London.

His most recent book is 'Weeping Britannia: Portrait of a Nation in Tears', published in 2015 by Oxford University Press. In 2014, he wrote and presented a BBC Radio series entitled 'Five Hundred Years of Friendship'.

Dr Dixon's other research and teaching interests include the cultural history of philosophy in 20th-century Britain and the life and thought of Oscar Wilde. Previous research projects have explored the histories of psychological categories, Victorian moral thought, and the relationships between science and religion.