If we want more diversity in our courts, boardrooms, and parliaments, then our individualised approach to merit may “now require quite a serious rethink”, according to Baroness Brenda Hale of Richmond. 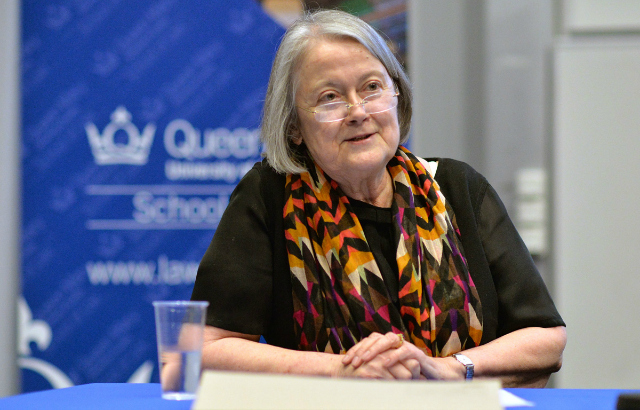 She was speaking at the launch of the QMUL Centre for Research on Law, Equality and Diversity, at which the discussion topic was ‘positive action in public and working life’.

“I have always been deeply sceptical about the idea of individual merit. It is, fundamentally, an ‘eye of the beholder’ concept, even if you have a generally applicable set of criteria for what you mean by merit. I’m even more sceptical about the concept of merit in the context of the needs of a collective body, such as a university or the Supreme Court. Collective bodies have needs for diversity among their membership. They need to be legitimate, they need to be representative of society in the eyes of all the people, and they must not constitute one section of society dictating to all others about how they should live their lives.”

Baroness Hale, the only woman on the UK Supreme Court, has previously called for more gender equality across Britain's legal system and has argued that greater diversity will improve and enrich the quality of justice.

Baroness Hale was joined on the panel by Saphieh Ashtiany, Chair of the Equal Rights Trust and Visiting Professorial Fellow at QMUL, and Dr Rainbow Murray, expert in gender equality at QMUL’s School of Politics and International Relations. The panel was introduced – to an audience of policy makers, academics, lawyers, and politicians – by Rosemary Hunter, Professor of Law and Socio-Legal Studies at QMUL’s School of Law.

In her remarks to the audience, Saphieh Ashtiany set the context in what she described as the ‘heyday’ of classic equality law in the UK; between 1975, when the Sex Discrimination Act was introduced, and the end of the 1990s. Despite much progress across so many areas, she argued that it is now clear that much more needs to be done to move forward the agenda of workplace diversity and equality.

“I have long thought that all we needed to do was dismantle disadvantage; that this would enable us to pick up the baton and run the race to the end. However, the parameters by which this race is set don’t allow us to do that. We think we are fair, we think we have robust recruitment practices, we think we have fair and proper systems for developing and bringing people forward – but I’m afraid that on each count we do not. I’ve come to the view that we need to re-evaluate the positive action provisions in the Equality Act,” said Professor Ashtiany.

Dr Rainbow Murray spoke about the contradictions that underpin many debates and contentions about gender quotas, merit, and equality.

“When we look at the issue of gender quotas – or indeed any other kind of quota – the principal argument used to oppose them is that they are anti-meritocratic. We hear ‘we are not choosing the best candidate for the job, we are choosing a candidate based on their sex’.

“We can only believe this if we accept that the status quo prior to gender quotas is meritocracy, and such a belief requires a certain amount of doublethink. If we don’t believe that men are inherently superior to women, how can we then accept as meritocracy the total domination of positions of power by privileged, white men? If that is meritocracy, then what is wrong with everyone who isn’t a privileged white male? If, as I contend, that isn’t meritocracy, then what is it? It’s privilege. It’s unfair advantage.  Men receive unapologetically exactly the advantage that they accuse quotas of giving to women.”

The event took place at Queen Mary University of London on Thursday 30 April 2015. The Centre for Research on Law, Equality and Diversity (LEAD) will be a new forum for academics, practitioners, judges and policy-makers who share an interest in the role of law in promoting greater equality and diversity in public and private institutions.

The Centre’s co-chairs are Professor Lizzie Barmes and Professor Kate Malleson. The launch took place as part of the School of Law’s programme of events to mark its 50th anniversary.