Dressing down the rabbit hole – how to become Alice in Wonderland

From 2 May to 9 November, QMUL's Dr Kiera Vaclavik will curate 'The Alice Look', an exhibition at the V&A Museum of Childhood. In this article, Dr Vaclavik considers the impact of Lewis Carroll's famous heroine on the way that we dress. 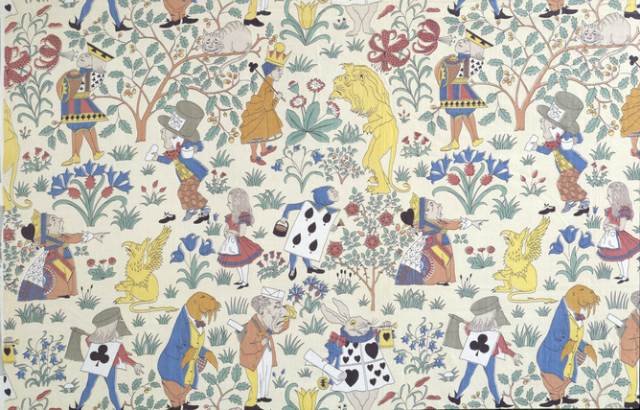 The blue dress, the blonde hair, the white apron and the sense of adventure: Alice in Wonderland has certainly leapt free of Lewis Carroll’s pages into our imaginations, onto our screens and stages and beyond. These days, it’s a fairly common occurrence to “be Alice”.

As a series of images and objects in the V&A Museum of Childhood’s upcoming exhibition, The Alice Look makes clear, people from across the world and all walks of life regularly dress as Alice for parties or Halloween, high-end photo shoots or even (their own) weddings.

Countless others wear garments adorned by Alice or associated with that unmistakable “Wonderland aesthetic” (think rabbits, playing cards, teacups, pocket watches). For the most part, this is a relatively superficial affair, lasting an evening or couple of days at most. But in some cases, a much more enduring and profound engagement with the character takes place.

I recently met four such women who, over a sustained period, have lived, breathed and worked to actually become Alice. Fiona Fullerton was there, star of the 1972 feature film directed by William Sterling. Then there was soprano Fflur Wyn, who is due to reprise her lead role in Opera Holland Park’s production this summer, and Royal Ballet principal dancer Lauren Cuthbertson, for whom Christopher Wheeldon created the role of Alice in 2011. Lastly, Lucy Farrett – who is one of the actresses in the immersive theatre extravaganza currently being performed in the Vaults under Waterloo station.

What quickly emerges in conversation with these women is the sheer physical strain of the role. There’s an impressive degree of multi-tasking involved: being Alice encompasses acting as well as dancing, puppetry and singing. Carroll himself was fully aware of the demands of the part, writing in an 1888 letter that it is “about as hard a one as a child ever took”, and observing with appropriately mathematical exactitude that it involved speaking no less that “215 times!”

Lauren Cuthbertson also quantified the gruelling nature of her version of the part: the terrible realisation that Act One involved dancing some 14 scenes back-to-back with no rest except a couple of rapid costume changes – and the 38 bruises which emerged in the aftermath of the first ever performance. In her open-air performance, Fflur Wyn endured the torments of multiple layers of costume under an unusually co-operative but fierce summer sun.

In the Vaults production, Alice is a deliberately fleeting presence, but the nature of the show still means that Farrett must deliver the same lines no less than 36 times… per evening! And if, for Fiona Fullerton, filming seems to have been a fun-filled series of interactions with British acting royalty, cycling merrily around Shepperton studios, it nevertheless involved three months away from home, trying to keep up with schoolwork whilst lodging in a provincial hotel filled to the rafters with elderly residents.

The demands of the role are such that it is highly unusual for children to play the role of Alice, who is just seven years old in the original text.

It seems certain that Carroll would have looked askance at the tendency to cast adults in the role. He once wrote of 30-year-old Ellen Terry (in a different production): “The gush of animal spirits of a light-hearted girl is beyond her now, poor thing! She can give a very clever imitation of it, but that is all.”

Many productions help bridge the gap between character and performer by making Alice older, frequently doubling her age or more. But a considerable age difference often still remains. Navigating between the pitfalls of excessive maturity and panto parody is surely one of the biggest challenges for performers and producers of Wonderland today. It’s perhaps made easier by the fact that performing freshness and innocence remains such a staple requirement for women on stage and screen – and beyond – today.

Fuzziness around the age issue is compounded in modern productions by the fact that the visual cues which enabled Victorian readers and audiences to immediately recognise Alice as a little girl (hair down, hem just below the knee, short sleeves) no longer pertain.

Tenniel’s original illustrations nevertheless serve as the model for countless Alice costumes including those of Fullerton and Wyn which, despite the 30 years separating them, differ from each other very little at all.

To set themselves apart, other productions deliberately eschew this classic Alice look of full-skirted blue dress and white pinafore. The Alice of the Vaults production, for example, wears a turquoise-green, neo-Victorian shabby-chic dress devoid of pinafore – although with key elements of Wonderland iconography such as a small gold pocket watch.

Similarly, in the Royal Ballet production, Cuthbertson wore, not blue, but lilac (perhaps in tribute to the first coloured Macmillan edition which adopted this colour). She also sported a short dark bob modelled not on Tenniel’s Alice but the real-life Alice (Liddell) for whom the book was initially produced.

Relatively minor modifications to colour and style notwithstanding, Alice’s appearance in each of these productions retains a distinct flavour of olde-worlde otherness and nostalgia. This is a point underlined by the fact that on the night we met, each of the Alices without exception appeared in a costume which has long dominated the female wardrobe but is still to make inroads into Alice’s look: namely, trousers.

It’s obvious that despite being widely hailed by critics and pundits in this anniversary year as a feisty, go-getting feminist icon, Alice has nevertheless remained – not unlike Lansley’s Alice trapped behind the looking-glass – in a considerably constrained conception of femininity.

Dr Kiera Vaclavik is a Senior Lecturer in French and Comparative Literature at Queen Mary University of London. She is based at the School of Languages, Linguistics, and Film.