Google Glass in the operating theatre 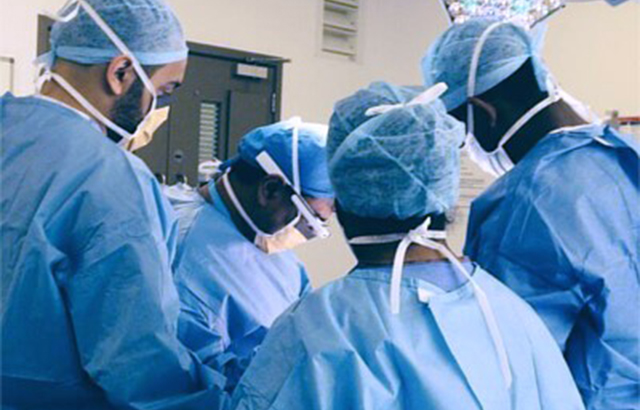 Over the last few centuries, surgery has traditionally been taught as an apprenticeship with students clamouring around the operating table to glimpse a view of both surgical technique and clinical anatomy.

Not much has changed over this time, even now, medical students will be crowded in the operating theatre, sometimes stuck in the background and waiting for many hours to get a glimpse of theory being put into practice.

Thanks to the introduction of video imaging systems such as the laparoscope - as used in keyhole surgery - we have begun to visualise surgery in a much clearer and more accessible fashion for a larger number of students, and so this has become the benchmark for training in modern abdominal surgery.

The next step is to show students major surgery in real time, something I decided to try using Google Glass. It is a wearable computer with an optical head-mounted display (OHMD). The device responds to voice commands using the android S voice software, allows point of view recording and runs Kitkat 4.4 or XE 17.2. There is limited software currently available but several start-up companies have begun to develop applications.

To take this idea further, I set up a project to see if Google Glass could change the way surgeons teach both surgical and anatomical skills. This was a collaboration between The Royal London Hospital (Barts Health NHS Trust) and Queen Mary University of London (QMUL).

In May, I wore Google Glass for the first time whilst I performed an operation and used Livestream® software to allow live streaming of the footage to both medical students and the general public across the globe. In total, almost 14,000 people accessed the stream from across 132 countries. Questions were asked live with the text displayed in the corner of the Google Glass display, which allowed for both teaching and interaction. All that was required to access the stream was a handheld device with an internet connection. Following this initial trial, 94% of students thought it was a good way of teaching surgery.

I have now carried out two further operations online, but to students only, via an embedded live steam on our dedicated website. This is password protected and lets us control of the stream via a secure server. I have also introduced moderation of the questions, which allows for better and more appropriate interaction for our live streams.

I am now also using a special 3D printed cover device to prevent the Google Glass display being disrupted by lens glare from the operation theatre lights, which are by necessity very powerful, and I will also continue to modify the quality of the stream to find the best overall settings.

All in all, this has been a great success - Google Glass will now be used as part of the curriculum at QMUL’s Barts and the London School of Medicine and Dentistry to deliver clinical skills, anatomy teaching and surgery from September 2014.

This article originally appeared as part of a series on the Software Sustainability Institute Blog: a day in the software life, in which researchers from all disciplines were asked to discuss the tools that make their research possible. You can find the original blog post here http://www.software.ac.uk/news/2014-07-11-google-glass-operating-theatre/.