The Big Question Lecture at Centre of the Cell: Is HIV still a death sentence?

To mark this year’s World AIDS Day (1 December), a leading HIV researcher at Queen Mary University of London will explore whether infection by the virus is a death sentence at a ‘Big Question’ lecture in Whitechapel on Tuesday 10 December. 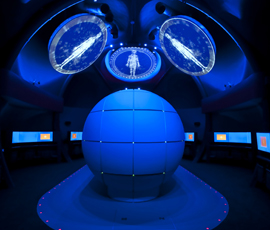 Hosted by Queen Mary’s Centre of the Cell - the first science education centre in the world to be located within biomedical research laboratories – Big Question lectures give a glimpse into the world of cell biology and the work of experts in the field.

Title questions are chosen by the Centre’s Youth Forum and designed to spark debate on topical, controversial or misunderstood issues.

Entry to the popular Big Question series is free and open to all aged 14 and over, from experienced scientists to those simply curious about new discoveries and advances.

Áine McKnight, Professor of Viral Pathology, will explain her research looking into proteins within cells that attack incoming viruses. To identify such proteins she has screened the entire human genome and discovered more than 114 proteins involved in preventing HIV replication within cells.

Her research team continues to investigate neutralisation of HIV by antibodies. In east London, Professor McKnight and her team have recruited more than 500 people living with HIV to take part in the research. Professor McKnight's research has shown that, with respect to neutralising antibodies, the diverse nature of the virus may not be the major obstacle for the development of a vaccine, as was once thought. Her group also continues to study how HIV causes AIDS in some patients.

Professor McKnight has spent her career researching HIV. In 1987, she joined the Institute of Cancer Research in London to study the role of neutralising antibodies in different strains of HIV. She was awarded an MSc in Immunology in 1990 by King's College, London, and a PhD in 1996 by the University of London. Professor McKnight joined Queen Mary’s medical school, Barts and The London School of Medicine and Dentistry in 2006.

Tickets for The Big Lecture are free of charge, but must be booked in advance via eventbrite: http://centreofthecell.eventbrite.co.uk/

The talk begins at 6pm, lasting for 45 minutes, and will be followed by a question and answer session.

Guests are then invited to spend an hour exploring Centre of the Cell’s interactive science ‘Pod’ with an additional ticket, priced at £5 or £3 for concessions.