Researchers at Queen Mary, University of London have received a £1.2m grant for a clinical trial aimed at improving rheumatoid arthritis treatment through the development of personalised healthcare. 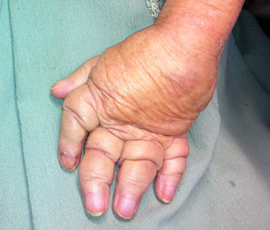 The funding is from the Efficacy and Mechanism Evaluation (EME) Programme, which is funded by the Medical Research Council and managed by the National Institute for Health Research.

The study, to be carried out in partnership with Barts Health NHS Trust, will test whether it is possible to predict which patients will respond positively to a particular therapy and thereby tailor their treatment. If the methods prove effective it could lead to significant improvements in patient care and annual savings to the NHS of as much as £6m to £8m.

Rheumatoid arthritis is an autoimmune disease that causes inflammation in the joints. Its main symptoms are joint pain and swelling and it affects around 400,000 people in the UK.

Although there is no cure, the last decade has seen significant advances in treatment and a number of powerful “biological therapies”, which target specific inflammatory pathways in the joint. However, these new therapies are expensive, result in an increased risk of serious infections and have proved ineffective in a significant number of patients.

The researchers, led by Professor Costantino Pitzalis, Head of the Centre for Experimental Medicine and Rheumatology at the William Harvey Research Institute, will be looking at a drug called Rituximab which is recommended by the National Institute of Clinical Excellence in the treatment of rheumatoid arthritis. This drug works by wiping out B cells (cells which normally produce antibodies that fight infections) and is effective in around 60 per cent of patients. However, most patients relapse after six to nine months and it is not effective in 40 per cent.

Professor Pitzalis said: “As around half of patients have very few B-cells in the joint, we hypothesise that in these patients the disease must be driven by other immune/inflammatory cells and they are less likely to respond to Rituximab. We will be looking at whether, by examining a small piece of the tissue lining the joint for the presence or absence of B cells prior to treatment, doctors will be able to predict the likelihood of response for the patient and make an informed drug choice.

“This is important as we know that for 40 per cent of patients receiving this treatment it is ineffective. If we were to demonstrate that through a biopsy we can predict who will and who won’t benefit, it will mean we can look at alternative treatment options and not expose people unnecessarily to a potentially toxic drug. This could also save the health service millions.”