Two medical students from Queen Mary, University of London have recently been appointed to the national committee of Medsin, a student network and registered charity tackling global and local health inequalities through education, advocacy and community action. 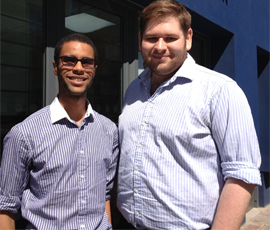 Medsin has over 30 branches in universities across the UK, with hundreds of students running local educational events, debates and campaigns. Medsin also runs a number of national activities, such as Sexpression, which promotes UK sexual health education in local schools, and Students for Kids International Project (SKIP), which supports child welfare in communities throughout the developing world.

Internationally, Medsin is the UK member of the International Federation of Medical Student Associations (IFMSA), attending their bi-annual meetings. The group also engages in high level global advocacy, sending delegations to events such as the UN COP17 climate talks in Durban, South Africa, in December 2011.

Cam will formerly take on the role of National Director, which is a full time sabbatical role, from 1 September. The role will involve working for external partners the Tropical Health Education Trust and in the office of Lord Nigel Crisp for two days per week. For the remaining three days a week, Cam will work on Medsin’s strategic themes for 2013-14 and its national activities, coordinating the national committee and representing Medsin at external events on a national and international level.

Cam spoke about Medsin and why students should get involved: "I’ve been involved in Medsin for three years now and the thing I love about it is that you always come away inspired by the other students and inspired to do more. As a medical student you have a powerful voice. Medsin’s slogan is ‘global health, local issue’ and as students in East London we are working with many of these international concerns. Whatever the decisions that are being agreed now will have an impact on us during our careers, so we need to get involved in campaigning now."

Samson, who has been involved in Medsin since he started his degree, has had the opportunity to travel to India as part of the SKIP project, and was also part of a Medsin delegation in Mumbai. Samson will also take on his role of Training Director in September, but will do whilst continuing his studies. Samson will look at making the training students can receive on global health issues more accessible, rolling out a programme of regional training and collaboration on a local level.

Samson spoke about Medsin and his new role: "Training can be a really fun way to share ideas and meet people who are passionate about change. When I started working in training for Medsin, I never could have predicted how much I'd learn and how much I'd enjoy it. For the coming year, I'm hoping that I'll be able to share this excitement, get more people involved and engaged and make the whole Medsin network stronger."

If you are interested in finding out more about Medsin at Queen Mary, University of London and how you can get involved please contact barts@medsin.org. For more information about Medsin, visit the website: http://www.medsin.org/.