Scientists from Queen Mary, University of London have discovered that carriers of a specific genetic variant linked to heart disease are at increased risk of developing a more severe form of the condition. 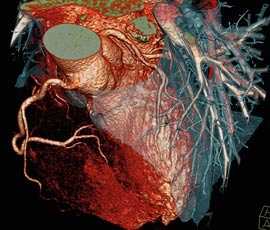 The research, which has furthered understanding of howthis gene variant increases therisk of coronary artery disease (CAD), opens up possibilities for the development of new treatments.

Coronary artery disease (also known as coronary heart disease) is the nation’s biggest killer, with around 94,000 deaths in the UK each year*. The condition happens when the blood supply to the heart is blocked by a build-up of fatty deposits within the walls of one or more of the coronary arteries, causing chest pain. CAD can lead to a heart attack if these build-ups of plaque break down, suddenly blocking the flow of blood to the heart.

Lifestyle factors – including smoking, a bad diet and lack of exercise – contribute to an individual’s risk of heart disease, but a number of genes have also been found to play a role.In this study the scientists focused on the gene region known as 9p21. This region has been strongly associated with heart disease, but it has been unclear whether it contributes to risk by increasing the build-up of plaque or by making it more likely that the plaque may break down, leading to a heart attack.

The team analysed genetic data from more than 30,000 individuals drawn from multiple international studies focused on the 9p21 gene region. They found that individuals carrying two versions (homozygous) of the risk variant of the 9p21 gene were 23 per cent more likely to develop a more serious form of the disease, with blockages in more than one of the three coronary arteries carrying blood to the heart.

Shu Ye, Professor of Molecular Medicine and Genetics at Queen Mary, led the study. Professor Ye said: “This finding is important as it suggests this genetic variant, carried by around 75 per cent of the population, increases the risk of heart disease by promoting the build-up of deposits within the walls of the arteries.

“Understanding the mechanisms involved means it is now possible to look at developing new therapies and treatments which can potentially reduce this build-up. Genetic tests which can identify this variant already exist and so it’s vital that we are able to more accurately interpret these risks.”

Kenneth Chan is joint first author of the study and a current medical student at Barts and The London School of Medicine and Dentistry, part of Queen Mary. He got involved with Professor Ye’s work through the School’s summer research studentship scheme.

Kenneth said: “It has been a privilege working in Professor Ye’s lab and being involved in this international collaboration in the voyage to understand the human genome, which propels us closer to delivering the promised novel treatments in the near future.”

The findings are published in the Journal of the American College of Cardiology.