Researchers from Queen Mary, University of London, and Barts Health NHS Trust have identified the genetic mutation behind a devastating disease of the small intestine. 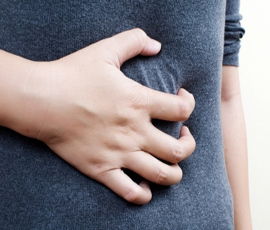 The scientists investigated the case of a brother and sister with a 40-year history of the rare intestinal disease known as cryptogenic multifocal ulcerating stenosing enteritis (CMUSE) and found they had a mutation in a single gene. The results are published in the journal GUT.

CMUSE is an extremely rare disease of previously unknown cause which is characterised by recurrent ulcers of the small intestine and  other organs. Symptoms vary but can include abdominal pain, fatigue, weight loss, fever and joint symptoms. Treatment is by surgery, removing the affected parts of bowel.

Professor Tom MacDonald, from the Blizard Institute at Barts and The London School of Medicine and Dentistry, part of Queen Mary, co-ordinated the research along with geneticist Professor David Kelsell.

Professor MacDonald said: “Rare diseases can be very informative scientifically and this is a particularly devastating disease which has blighted the lives of these siblings from a very young age.

“By analysing the DNA of these siblings we were able to pinpoint a mutation of the PLA2G4A gene which we believe is behind their condition. Importantly, this genetic knowledge means we now know which pathway has been affected in these patients and their clinical management has been revised with suitable drugs and dietary supplements to target this.”

The findings explain why patients with CMUSE have stomach ulcers similar to those found in patients who take non-steroidal anti-inflammatory drugs (NSAIDS) such as aspirin to prevent inflammation and cancer.

NSAIDs reduce inflammation by blocking a key enzyme called cyclooxygenase, which converts arachidonic acid to prostaglandins. Prostaglandins protect against stomach ulcers as they stimulate the secretion of the layer of mucus which covers the gastric mucosa – the mucous membrane layer of the stomach – protecting it from the gastric acid in the stomach.

The genetic mutation affecting the siblings means they are unable to produce arachidonic acid, and therefore like patients taking NSAIDs, have a similar impairment in the production of prostaglandins. The researchers therefore suggest that patients presenting with intestinal ulceration who are not taking NSAIDs should be screened for mutations of the PLA2G4A gene.

Further research is needed on other patients with CMUSE to determine if they also harbour PLA2G4A mutations and to further understand the biochemical impacts of the mutation.

The study was supported by grants from the European Commission via the IPODD programme (Intestinal Proteases: Opportunity for Drug Discovery), and Barts and The London Charity.