They may appear to be a sweet treat, but a new study from researchers at Queen Mary, University of London, has revealed the high level of salt in many biscuits. 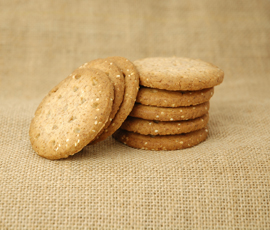 Research carried out by Consensus Action on Salt and Health (CASH), based at the Wolfson Institute of Preventive Medicine at Queen Mary, found nearly 90 per cent of 479 biscuits available at local supermarkets receive an amber traffic light for salt – meaning parents may unwittingly be filling their children’s lunch boxes with too much salt.

CASH is urging manufacturers to reduce the amount of salt in all their biscuits to the lowest levels possible.

More than 110 of the biscuits included in the survey were as salty, or saltier, than Butterkist Salted Popcorn (0.9g per 100g). CASH warns that with children eating as many as 46 packets of biscuits a year they are putting themselves at a greater risk of developing high blood pressure as adults.

Recent data from the UK’s National Diet and Nutrition Survey 2011 show that 60 per cent of 19-64 year-olds regularly eat biscuits. And children are eating just as many – if not more –than adults, with 80 per cent of under-10s eating them on a regular basis (at an average of one to two biscuits a day). The maximum advised salt intake for children is much lower than that of adults. A child aged four to six should have half that of an adult, at 3g a day, for children aged 7 to 10 years the recommended limit is 5g a day and from 11 years up it is 6g a day

Examples of biscuits high in salt:

CASH nutritionist Sonia Pombo said: “Many people will be very surprised to hear that so much salt is added to sweet biscuits.

The survey also revealed large variation in the amount of salt between brands of the same biscuit type. Within digestive biscuits, some branded biscuits were found to have more than double the salt content of some supermarket own brand biscuits. Some varieties of biscuits had consistently lower levels of salt across all the brands, with some of the more traditional favourites such as custard creams and chocolate bourbons containing ‘trace’ levels of salt per portion (one biscuit).

Examples of biscuits low in salt

Graham MacGregor, Professor of Cardiovascular Medicine at Queen Mary and CASH Chairman said: “With salt hidden in sweet foods as well, how can parents be expected to prevent their children from eating too much salt, putting them at risk of high blood pressure as adults, one of the biggest cause of death in the UK?

“Manufacturers of biscuits need to remove the large and unnecessary amounts of salt that they put into biscuits.”

For further information and survey results visit the CASH website at www.actiononsalt.org.uk