Research opens up possibility of therapies to restore blood-brain barrier

Research led by Queen Mary, University of London, has opened up the possibility that drug therapies may one day be able to restore the integrity of the blood-brain barrier, potentially slowing or even reversing the progression of diseases like multiple sclerosis (MS). The study, funded by the Wellcome Trust, is published in Proceedings of the National Academy of Sciences. 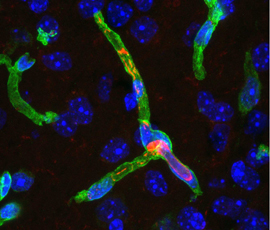 In a number of neurodegenerative brain diseases, including MS, the BBB is compromised, allowing inappropriate cells to pass into the brain with devastating consequences.

In this study the researchers identified a specific protein – known as Annexin A1 (ANXA1) – as being integral in maintaining the BBB in the brain. The authors initially found that mice bred to lack this protein showed a decrease in integrity of the BBB compared to controls.

Crucially, the researchers found that treating in vitro brain endothelial cells with human recombinant ANXA1 restored the key cellular features needed to reinstate the integrity of the BBB. The same was seen with the ANXA1 knockout mice, where administering the protein reversed the permeability of the BBB within 24 hours.

Dr Egle Solito, from Barts and The London School of Medicine and Dentistry, part of Queen Mary, who co-ordinated the study said: “Our findings suggest this protein plays a key role in maintaining a functioning BBB and, more importantly, has the potential to rescue defects in the BBB. We now need to carry on our research to see how much this molecule may be exploited for therapeutic uses in conditions such as MS, or as a biomarker to help in early diagnosis.”