A preventive procedure for heart attack patients reduces the risk of future serious or fatal cardiac problems by 65 per cent, finds a multicentre study coordinated by researchers from the Wolfson Institute of Preventive Medicine, at Queen Mary University of London. 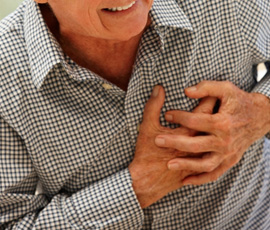 There are about 100,000 heart attacks in the UK each year. Unblocking the artery that causes the heart attack saves lives. Current clinical guidelines recommend that the procedure – angioplasty, also called percutaneous coronary intervention (PCI) – should be used to reopen only the blocked coronary artery which caused the heart attack, even if other partially blocked arteries are observed at the time of the procedure.

The Preventive Angioplasty in Myocardial Infarction (PRAMI) trial examined what happens if doctors not only remove the arterial blockage that triggered the heart attack, but at the same time, also perform Preventive PCI in other partially narrowed arteries observed during the procedure.

The trial was stopped early following a recommendation by the Data Monitoring Committee because the results showed a clear benefit in favour of Preventive PCI.   The trial results are to be presented today at the European Society of Cardiology’s 2013 Congress in Amsterdam and published online in the New England Journal of Medicine.

“When a patient with a heart attack is admitted to hospital, we know that performing a PCI to unblock the artery responsible for the heart attack is life-saving. But, until the results of this trial were known, it was uncertain whether doctors should perform additional PCI, during the same procedure, in other partially blocked arteries to prevent heart attacks from happening in the future,” said lead investigator, Dr David Wald, from the Wolfson Institute of Preventive Medicine at Barts and the London School of Medicine (part of Queen Mary) and Consultant Cardiologist.

After an average follow-up of about 2 years, a total of 21 patients in the preventive PCI group and 53 in the group that did not have preventive PCI had experienced one of three primary outcomes (cardiac death, non-fatal heart attack or refractory angina). This result showed a highly significant  relative risk reduction of 65 per cent (95 per cent CI 0.21-0.58), p<0.001) and that 14 in every 100 patients who had preventive PCI would benefit by the prevention of any one of these serious outcomes.

“The results of this trial show that in patients with heart attack, preventive PCI reduces the risk of cardiac death, a subsequent heart attack or medical therapy-resistant angina by about two thirds. The preventive effect was similar for the most serious of these disorders, cardiac death and subsequent heart attack, alone,” said Dr Wald who added, “With this new evidence, consideration can be given to revising current guidelines.”

The rate of complications was similar in the preventive PCI and no preventive PCI groups (procedure-related stroke, 2 vs 0; bleeding requiring transfusion or surgery, 7 vs 6; and the contrast-induced nephropathy (kidney damage) requiring dialysis, 1 vs 3).

The results show that on average, preventive PCI extends the procedure time by about 20 minutes, and exposed patients to an X-ray dose equivalent to an angiogram. Dr Wald added that “the initial costs of preventive PCI are higher but there would be a reduced cost thereafter, with less need for subsequent hospital admissions, cardiac investigations and revascularisation procedures”.