Newborn babies’ immune system development and levels of vitamin D have been found to vary according to their month of birth, according to new research. 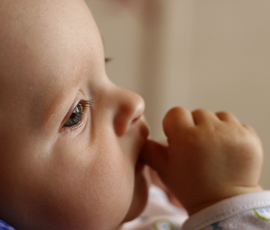 The research, from scientists at Queen Mary, University of London and the University of Oxford, provides a potential biological basis as to why an individual’s risk of developing the neurological condition multiple sclerosis (MS) is influenced by their month of birth. It also supports the need for further research into the potential benefits of vitamin D supplementation during pregnancy.

Around 100,000 people in the UK have MS, a disabling neurological condition which results from the body’s own immune system damaging the central nervous system. This interferes with the transmission of messages between the brain and other parts of the body and leads to problems with vision, muscle control, hearing and memory.

The development of MS is believed to be a result of a complex interaction between genes and the environment.

A number of population studies have suggested that the month you are born in can influence your risk of developing MS. This ‘month of birth’ effect is particularly evident in England, where the risk of MS peaks in individuals born in May and drops in those delivered in November. As vitamin D is formed by the skin when it is exposed to sunlight, the ‘month of birth’ effect has been interpreted as evidence of a prenatal role for vitamin D in MS risk.

In this study, samples of cord blood – blood extracted from a newborn baby’s umbilical cord – were taken from 50 babies born in November and 50 born in May between 2009 and 2010 in London.

The blood was analysed to measure levels of vitamin D and levels of autoreactive T-cells. T-cells are white blood cells which play a crucial role in the body’s immune response by identifying and destroying infectious agents, such as viruses. However some T-cells are ‘autoreactive’ and capable of attacking the body’s own cells, triggering autoimmune diseases, and should be eliminated by the immune system during its development. This job of processing T-cells is carried out by the thymus , a specialised organ in the immune system located in the upper chest cavity.

The results showed that the May babies had significantly lower levels of vitamin D (around 20 per cent lower than those born in November) and significantly higher levels (approximately double) of these autoreactive T-cells, compared to the sample of November babies.

Co-author Dr Sreeram Ramagopalan, a lecturer in neuroscience at Barts and The London School of Medicine and Dentistry, part of Queen Mary, said:  “By showing that month of birth has a measurable impact on in utero immune system development, this study provides a potential biological explanation for the widely observed “month of birth” effect in MS. Higher levels of autoreactive T-cells, which have the ability to turn on the body, could explain why babies born in May are at a higher risk of developing MS.

“The correlation with vitamin D suggests this could be the driver of this effect. There is a need for long-term studies to assess the effect of vitamin D supplementation in pregnant women and the subsequent impact on immune system development and risk of MS and other autoimmune diseases.”

The research letter is published today in the journal JAMA Neurology.