Researchers have identified a genetic cause of severe obesity that, though rare, raises new questions about weight gain and energy use in obese individuals. 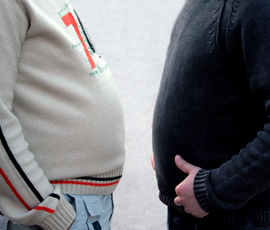 The study, published today in the journal Science*, involved genetic surveys of several groups of obese humans and experiments in mice. The international research team, led by Boston Children’s Hospital and including Queen Mary, University of London, found mice with the genetic mutation gained weight even while eating the same amount of food as their normal counterparts.

The affected gene, Mrap2, has a human counterpart, MRAP2, which was first identified by scientists at the William Harvey Research Institute at Queen Mary and appears to be involved in regulating metabolism and food consumption.

Scientists found that mice with the Mrap2 gene knocked out grew to about twice their normal size. Weight gain was greatest when both copies of Mrap2 were knocked out, but the mice still showed weight gain and appetite increase with one working copy of the gene.

“These mice aren’t burning the fat, they’re somehow holding onto it,” says the study’s lead investigator Joseph Majzoub, MD, chief of endocrinology at Boston Children’s. “Mice with the genetic mutation gained more weight, and we found similar mutations in a cohort of obese humans.”

Scientists at Queen Mary along with colleagues at the NIHR Cambridge Biomedical Research Centre then studied the MRAP2 gene mutations found in groups of obese patients from around the world. Four mutations were identified in MRAP2 among the 500 people, all in patients with severe, early-onset obesity; each of the four affected patients had only one copy of the mutation.

While the finding suggests that these rare mutations directly cause obesity in less than one per cent of the obese population, the researchers suspect that other mutations in the gene might occur more commonly and might interact with other mutations and environmental factors to cause more common forms of obesity.

Study co-author Dr Li Chan, from the William Harvey Research Institute at Barts and The London School of Medicine and Dentistry at Queen Mary, says: “Since first identifying MRAP2, our team at Queen Mary found that the protein encoded by this gene interacts with the melanocortin receptors*. Defects in these receptors are known to be a cause of early-onset obesity, and so we suspected MRAP2 may play an important role in metabolism. The current study has confirmed this, showing that loss of a single copy of the gene causes significant obesity in both mice and humans.

“This work confirms MRAP2 as another genetic contributor to human obesity. In collaboration with NIHR Cambridge Biomedical Research Centre and the Sanger Institute, our on-going programme of research is focused on understanding MRAP2’s mechanism of action as well as its role in more common forms of obesity.”

The protein created by the Mrap2 gene appears to facilitate signalling to a receptor in the brain called Mc4r, which helps increase metabolism and decrease appetite as part of a larger signalling chain involved in energy regulation. Fat cells produce the hormone leptin, prompting receptors in the brain to produce a second hormone, αMSH. Mc4r detects this hormone with the aid of Mrap2, leading to a decrease in appetite and weight. Mutations in this signalling chain, including mutations in Mc4r, are known to increase the likelihood of obesity.

While the mice without Mrap2 did not eat more at first, they still gained weight faster than the controls. Later, their appetites increased and they continued to gain more weight than the controls. even when held to the same diet and quantity of food. In the end, the mutant mice had to be underfed by 10 to 15 percent to show the same weight gain as their normal peers.

One theory – the thrifty-gene hypothesis – holds that rare mutations in genes like Mrap2 exist because they gave humans an evolutionary advantage in times of severe famine. Further investigation into how these mutations work may provide insight into the body’s mechanisms for energy storage and use. In the present study, the researchers did not observe anything to explain why the mutant mice were storing more food energy, such as a difference in activity level or heat output.