The high cost of medication, stigmatisation and poor acceptance of their condition are causing young adults to take a dangerous approach to managing their asthma, according to new research published today in the journal BMJ Open. 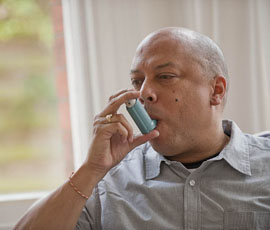 In the UK 5.4 million people are currently receiving treatment for asthma: 1.1 million children (one in 11) and 4.3 million adults (one in 12). There were 1,131 deaths from asthma in the UK in 2009. Most asthma deaths are preventable.

Despite the availability of effective treatments, poor asthma control is common.

The overuse of short-acting bronchodilators (“quick-acting” inhalers, usually blue, which relieve acute asthma symptoms) is a marker of poor asthma control and is linked to increased risk of hospital admission and death from asthma.

In this study, led by Queen Mary, University of London, researchers looked at why young adults (20yrs -32yrs) overuse short-acting bronchodilators. The researchers interviewed 21 young adults from the same urban general practice who were classed as either high users (12) or low users (nine) of short-acting bronchodilators as judged by their number of prescriptions. They found:

Chris Griffiths, Professor of Primary Care at Queen Mary, who led the research said: “Relying on short-acting bronchodilators – ‘my blue (inhaler) takes a battering’ as one patient put it – is not a safe way to manage asthma and individuals taking this approach are putting their lives and health at risk.

“Our findings suggest a number of possible strategies to support people to manage their condition better. Providing free asthma medication, particularly to those on low incomes, could help boost the numbers using preventive medication. Better education, particularly at the time of diagnosis, could help people accept and adapt to their illness, while reducing stigmatisation might mean people feel more comfortable about using their inhalers in public.”

Emily Humphreys, Head of Policy and Public Affairs at Asthma UK, said: “Over-reliance on reliever asthma medicines instead of preventers puts people at greater risk of a potentially fatal asthma attack, so this study is really important in highlighting some of the reasons behind it.

“In the meantime it is absolutely crucial that healthcare professionals explain how medicines work, particularly when younger people are diagnosed with asthma, to ensure that they understand how to manage their condition.”