An app created by researchers at Queen Mary University of London, which transforms photographs of drawings into music, has reached the Creative App of the Year shortlist at the Stuff Gadget Awards 2013. 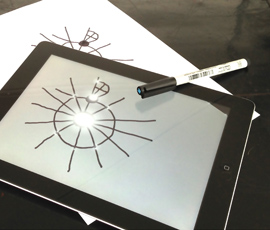 Stuff - the top technology magazine and TV channel - has nominated Tunetrace alongside five other apps, with the winner set to be announced on Wednesday 4 December through a special issue of the magazine.

Created for iPhones and iPads, Tunetrace - which is free to download – translates a photograph into a skeleton of line endings and crossings. Twinkling lights on the screen obey a few very simple rules to navigate across a drawing, making music as they go. Creations can then be shared via Twitter, Facebook and email.

Tunetrace was created through a collaboration between QApps, Queen Mary’s app development venture, and developer, digital artist and BAFTA winner Ed Burton, who is now a researcher at Queen Mary’s School of Electronic Engineering and Computer Science.

Tunetrace is supported with fun, simple-to-use classroom resources, to make it easy for anyone to get interested in computer programming just by drawing shapes.

After its launch, the app was featured on the Discovery Channel, Wired magazine UK and Japan, and a Guardian 20 best iPhone and iPad app list.

Professor Peter McOwan, Vice Principal for Public Engagement and Student Enterprise is co-founder of QApps, which aims to turn research and expertise into useful and exciting smartphone technology. He says: “We are delighted to be on the Stuff Awards short list. Tunetrace has been great fun to develop and I'm delighted people are enjoying it and creating and sharing amazing music and visuals.

"For those who liked Tunetrace we have also been looking at ways to extend the idea to re sequence an existing music track and have been working with Swedish group NONONO to create new ways to visually remix their track Pumpin Blood.”

Tunetrace is based on EPSRC-funded research as part of Computer Science for Fun and supported by ImpactQM, a three-year research project funded by Engineering and Physical Sciences Research Council (EPSRC) and Queen Mary Innovation.

See the demo video and download the app here: http://www.qappsonline.com/apps/tunetrace/