A nectar-feeding bat that was thought to eat insects in passing has been discovered to target its moving prey with stealth precision, according to new research by a scientist at Queen Mary University of London. 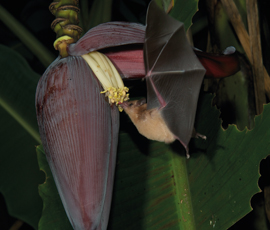 The researchers uncovered for the first time that the Pallas long-tongued bat use echolocation – a complex physical trait that involves the production, reception and auditory processing of ultrasonic pulses for detecting unseen obstacles or tracking down prey. Most bats produce a rapid sequence of echolocation pulses to attack their prey and many insects have developed ‘bat-detecting ears’ in return to avoid being caught.

A genetic analysis of the bat’s food waste showed that it consumes a type of moth that should be sensitive to being captured. To determine how the bats approach their insect prey, the scientists used sound recordings and infrared video to monitor the bats detecting and approaching tethered mealworms.

The results, published in the journal Functional Ecology, show that the bat’s echolocation calls were high in frequency but low in intensity making it difficult for the insect to detect the imminent danger.

“When we compared the bats’ echolocation calls to the moths’ auditory abilities, we found that the low intensity echolocation calls were not loud enough to trigger the auditory neurons of moths with ears,” explains Dr Elizabeth Clare from Queen Mary’s School of Biological and Chemical Sciences.

“In effect, the echolocation of Pallas’s long-tongued bats is too quiet for the moths to hear and allows them to sneak up on their target using a stealth tactic.”

The discovery means that the European barbastelle bat (Barbastella barbastellus) is no longer the only bat to use stealth echolocation to sneak up on moths.

Dr Clare added: “Our analysis suggests there might be more bats than previously thought that benefit from this stealthy approach that prevents prey from escaping by listening for bats.”

The Pallas long-tongues bats (Glossophaga soricina) are an important pollinator in Central and South America and belong to a group of bats that are often called ‘whispering bats’ because many emit relatively quiet echolocation calls to forage within dense vegetation.