A new model from Queen Mary, University of London could be a useful security tool in tracking people in large, busy venues such as airport terminals and shopping centres. 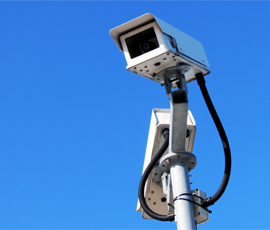 The research fuses information gathered from multiple Close-Circuit Television (CCTV) network cameras and geographical maps for the first time, and could be useful in locating people in blind-spots where the CCTV cannot see, known as invisible areas.

Co-author Professor Andrea Cavallaro and director of Queen Mary's Centre for Intelligent Sensing, based in the School of Electronic Engineering and Computer Science explained, "Linking distant and disjointed camera views to follow individuals in a large CCTV network, for example in a train station or in a sports venue, enhances the ability to monitor wide areas to tackle crime. Also, this new research model could be used to collect data to guide the redesign of the layout of buildings in order to facilitate the flow of people, which could help evacuation in an emergency situation."

The researchers created a novel re-identification method that predicts a person's movements in invisible areas using a combination of behavioural models and floor plans. The model was tested using CCTV footage from London's Gatwick airport to predict a person's movements based on specific destinations on site such as exits, shops, seating areas and meeting points.

The possible path each person is likely to follow is predicted after generating a number of potential movement trajectories from one monitored zone to another, using the fact that specific destinations act as 'attractors' for human movements. The model accounts for the natural willingness of people to stay at a comfortable distance from walls and other barriers.

The research will feed into a new EU four-year video surveillance project called CENTAUR, coordinated by Fortune 100 company Honeywell, and is published in the journal Neurocomputing.