Researchers have discovered a social chromosome in the highly invasive fire ant that helps to explain why some colonies allow for more than one queen ant, and could offer new solutions for dealing with this pest. 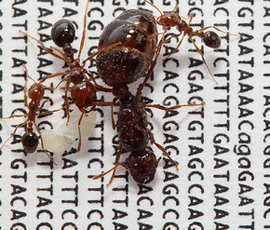 The red fire ants live in two different types of colonies: some colonies strictly have a single queen while other colonies contain hundreds of queens.

Publishing in the journal Nature (Wednesday 16 January 2013), scientists have discovered that this difference in social organisation is determined by a chromosome that carries one of two variants of a ‘supergene’ containing more than 600 genes.

The two variants, B and b, differ in structure but have evolved similarly to the X and Y chromosomes that determine the sex of humans. If the worker fire ants in a colony carry exclusively the B variant, they will accept a single BB queen, but a colony that includes worker fire ants with the b variant will accept multiple Bb queens. The scientists analysed the genomes of more than 500 red fire ants to understand this phenomenon.

“This was a very surprising discovery - similar differences in chromosomal structure are linked to wing patterns in butterflies and to cancer in humans but this is the first supergene ever identified that determines social behaviour,” explains co-author Dr Yannick Wurm, from Queen Mary’s School of Biological and Chemical Sciences.

“We now understand that chromosomal variants determine social form in the fire ant and it’s possible that special chromosomes also determine fundamental traits such as behaviour in other species.”

During the reproductive season, young winged queens from both types of colonies emerge for their mating flights and are fertilised by males. Young queens destined to establish their own single-queen colonies disperse far and wide. This social form is highly successful at invading new territories. The other young queens join existing multiple-queen colonies close to their maternal colony. The multiple queens cooperating in such colonies are able to produce more workers than are found in a single-queen colony. This makes multiple queen colonies the more successful social form in busy environments.

The red fire ant is infamous for its painful sting in South America where it is a native species, and in many other parts of the world where its aggressiveness and high population density have made it an invasive pest. It was accidentally introduced to the Southern USA in the 1930s and has since spread to many warm parts of the world including China and Australia. Efforts at controlling the spread of this species have largely been unsuccessful, as indicated by its Latin name, Solenopsis invicta, meaning “the invincible”.

Dr. Wurm added, “Our discovery could help in developing novel pest control strategies. For example, a pesticide could artificially deactivate the genes in the social chromosome and induce social anarchy within the colony.”

This work was carried out at Queen Mary, University of London; the University of Lausanne; the Swiss Institute for Bioinformatics the U.S. Department of Agriculture (USDA), and Academia Sinica. It was funded by the Biotechnology and Biological Sciences Research Council in the UK; Biodiversity Research Center (Academia Sinica) in Taiwan; a USDA grant, and by several grants from the Swiss NSF and an ERC advanced grant.