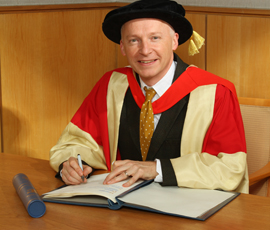 In The Secret Mathematicians, du Sautoy will explain how artists are often subconsciously drawn to the same structures that fascinate mathematicians. From composers to painters, writers to choreographers, the mathematician’s palette of shapes, patterns and numbers has proved a powerful inspiration to the creative mind.

Through the work of artists such as Salvador Dali, Olivier Messiaen – the composer who wrote a quartet based on prime numbers while he was a prisoner of war - and choreographer Rudolf Laban, du Sautoy will reveal how maths ideas influence creative output. He will go on to explain how the mind of the mathematician can also be driven by strong aesthetic values.

Marcus du Sautoy is a TV and radio presenter, author, writer for the UK’s leading newspapers, the Charles Simonyi Professor for the Public Understanding of Science and Professor of Mathematics at the University of Oxford and a Fellow of New College.

Having completed his DPhil at Oxford, du Sautoy spent a year as a post-doc at Queen Mary’s School of Mathematical Sciences. He has lectured at Queen Mary on several occasions, including the First Drapers’ Lecture (2006) and the flagship William Harvey Day in 2010. In December 2012, Professor du Sautoy was named Honorary Doctor of Science at Queen Mary.

Seats at the event are free and open to all.  With tickets originally selling out in just two days, the lecture has now been moved to the larger Great Hall of the People’s Palace, and more tickets made available.

To book your place at this event please see:
http://secretmathematicians.eventbrite.com