New research led by a team at Queen Mary, University of London, has found evidence of how daily changes in temperature affect the fruit fly’s internal clock. 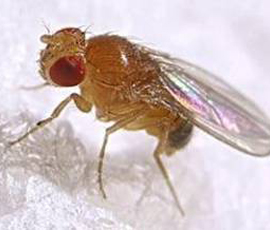 “A wide range of organisms, including insects and humans, have evolved an internal clock to regulate daily patterns of behaviour, such as sleep, appetite, and attention,” explains Professor Ralf Stanewsky, senior study author from Queen Mary’s School of Biological and Chemical Sciences.

“Research on animal and human clocks shows that they are fine tuned by natural and man-made time cues, for example the daily changes of light and temperature, alarm clocks and ‘noise-pollution’. Understanding the principles of clock synchronisation could be useful in developing treatments against the negative effects of sleep-disorders and shift-work. This research has many implications because it extends our knowledge of how the environment influences body clocks.”

Scientists have a good understanding of how light affects the internal body clock, also known as the circadian clock. Specially evolved cells in the brain contain the circadian clock, which needs to be synchronised with the natural environment every day to help them run on time.

In this new study, the researchers made groups of fruit flies ‘jet-lagged’ by exposing them to daily temperature changes reflecting warmer or colder climates to understand how temperature affects the circadian clock.

The team discovered that a group of ‘dorsal clock cells’ found in the back of the fly’s brain was more important for clock-synchronisation at warmer temperatures. But a   group of ventral clock cells found further to the front of the brain played an important role at the cooler temperature range. In addition to their clock function, these cells also act like a thermometer, being more active at certain temperatures.

The research also shows that removing the light-receptor Cryptochrome, an important component in synchronising the clock to the daily light changes, leads to the flies being more sensitive to temperature changes. This could help to explain why daily light changes, which are a more reliable time cue compared to the daily temperature fluctuations, are the dominant signal in nature for synchronising the clock.

This study is reported today in the journal Current Biology  (Thursday, 17 January 2013).