Physicists have confirmed the surprising behaviour of one of nature’s most unusual particles called neutrinos, which are thought to play a fundamental role in the formation of the universe. 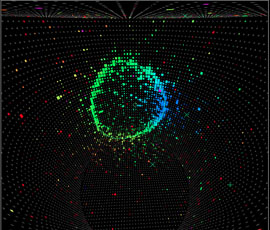 3D image of an electron neutrino in the detector

The sun and radioactive decays are a natural sources of neutrino production. Described as ‘ghost particles’ because they are highly elusive and simply pass through the environment with almost no effect, neutrinos have been very difficult to study, until now.

The Tokai to Kamioka (T2K) experiment in Japan  produces a beam of neutrinos in the Japan Proton Accelerator Research Complex (J-PARC) located in Tokai village, on the east coast of Japan, north of Tokyo. The neutrino beam is monitored by a detector that is almost 200 miles away on the west coast of Japan. The large distance between the beam and detector is necessary to allow the neutrinos to change state, because they are so light the distance has to be hundreds of kilometres.

The definitive observation of the neutrino’s changing state may partly explain why there’s an excess of matter over antimatter (particles that have the same mass but opposite charge) in the universe, which is one of the most profound mysteries in science.

Queen Mary’s Neutrino Group is a key member of the T2K long-baseline neutrino experiment. The group, led by Professor Francesca Di Lodovico contributed significantly to the construction and operation of the neutrino detector.

Professor of particle physics, Francesca Di Lodovico said: “This is a highly significant result and is an important step forward in the understanding of the matter-antimatter asymmetry in the universe. It demonstrates the vital contribution of UK science, and Queen Mary’s School of Physics and Astronomy in particular to this measurement.”

The Group were involved in the creation of the experiment and determined the spectrum of the neutrino beam before oscillation, which was a key component in the measurement of this result.

Professor Di Lodovico added: “This result is even more impressive in the light of the 11 March 2011 earthquake, from which T2K recovered thanks to the dedication of the Japanese and international institutes.”

The results are announced today (Friday 19 July) at the European Physical Society meeting in Stockholm. The T2K Collaboration is a 500-strong alliance of scientists in 11 countries.