Scientists from Queen Mary University of London have developed a robot to perform stand-up comedy to test what makes audiences laugh. 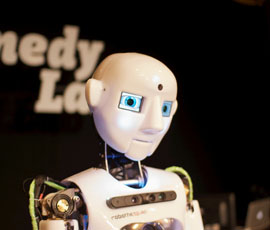 On the eve of the Edinburgh fringe festival, the life-size robot called RoboThespian built by Engineered Arts performed two gigs alongside comedians Andrew O’Neill and Tiernan Douieb at the Barbican Centre last week.

Researchers from Queen Mary’s Cognitive Science Research Group analysed the robot against its human competition for the way it interacted with the audience and made them laugh.

The performance was a live experiment to test how different gestures, timings and movement affect the responses to a joke. The researchers wanted to understand whether the robot can sense the audience’s response and react appropriately or if it could 'work the audience' as well as a human comedian.

Kleomenis says: “We used computer vision and audio processing software to detect the response of each audience member simultaneously– something a human comic cannot do. The machine used this information to determine who to look at and which gestures to use.

“We still have to analyse the performance but it’s clear already that even relatively small changes in the timing of delivery make a big difference to audience response.”

The research is part of work on audience interaction being pioneered by researchers at Queen Mary’s Cognitive Science Group, part of the School of Electronic Engineering and Computer Science, who are looking at the ways in which performers and audiences interact with each other, and how this affects the nature of live experiences.

Professor Pat Healey, leader of the Cognitive Science Research Group, said: “We have studied audiences at festivals, street performance and more recently stand-up comedy. Using robots allows us to experiment with how stand-up comedians deliver their jokes and test their effects on audience responses.

“Although a lot of previous work has focused on performers, we are more interested in audiences, what they contribute to the live experience and ultimately how humans interact with each other in large groups. This research will help us design more compelling live experiences and make technologies such as robots more entertaining and engaging.”

The free gigs were a collaboration between Queen Mary, RoboThespian's creators Engineered Arts, and launched Hack The Barbican, London’s biggest ever experiment in cross-disciplinary collaboration taking place in the Barbican Centre this month.