Scientists from Queen Mary, University of London are part of the team to discover the first evidence of small meteoroids, ranging from a centimetre to several metres in size, breaking into streams of rubble and crashing into Saturn's rings. 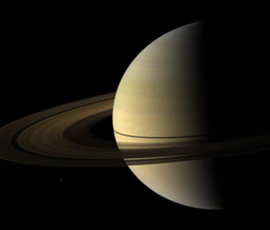 Small, speeding objects frequently pummel bodies throughout our solar system such as the 17-metre-wide meteor that hurtled over Chelyabinsk, Russia on 15 February 2013, leaving a bright white streak across the sky and a rain of rock fragments. Scientists have been searching for years to find these objects at Saturn and have now found evidence of impacts in images of Saturn’s rings, taken by NASA’s Cassini spacecraft.

Publishing in Science, the Cassini team was able to see the tracks left by nine of these objects in 2005, 2009 and 2012. The Saturnian equinox in summer 2009 was an especially fruitful time to see the debris left by impacts: the very shallow sun angle on the rings caused the clouds of debris to look bright against the darkened rings in pictures from Cassini's imaging science subsystem.

Lead author Matt Tiscareno, based at Cornell University in Ithaca, New York, said: "We knew that these little impacts were constantly occurring, but we didn’t know how big or how frequent they might be, and we didn’t necessarily expect them to take the form of spectacular shearing clouds,"

"The sunlight shining edge-on to the rings at Saturnian equinox acted like an anti-cloaking device, so that these usually invisible features became plain to see." 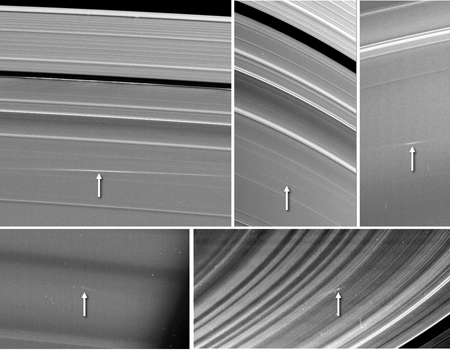 Meteors Meet Saturn's Rings: Five images of Saturn's rings, taken by NASA's Cassini spacecraft between 2009 and 2012, show clouds of material ejected from impacts of small objects into the rings. Clockwise from top left are two views of one cloud in the A ring, taken 24.5 hours apart, a cloud in the C ring, one in the B ring, and another in the C ring. The arrows point to the cloud structures, which spread out at visibly different angles than the surrounding ring features. The cloud of ejected material were visible because of the angle sunlight was hitting the Saturn system and the position of the the spacecraft. Image credit: NASA/ JPL-Caltech/ Space Science Institute/ Cornell

The key observations in 2009 were designed by Queen Mary astronomer Kevin Beurle shortly before his death in a ballooning accident.

"The importance of these discoveries in understanding impact events is a fitting tribute to Kevin's hard work and passion for this mission" said Professor Carl Murray, fellow co-author and Cassini Imaging Team Member from Queen Mary's Astronomy Unit.

This latest Cassini finding makes Saturn's rings the only other location besides Earth, the moon and Jupiter where scientists and amateur astronomers have been able to observe impacts in process.

Results from Cassini have already shown that Saturn's rings act as very effective detectors of many kinds of surrounding phenomena, including the interior structure of the planet and the orbits of its moons. For example, a subtle but extensive corrugation that ripples 19,000 kilometers (12,000 miles) across the innermost rings tells of a very large meteoroid impact in 1983.

Tiscareno and colleagues now think meteoroids of this size probably break up on a first encounter with the rings, creating smaller, slower pieces that then enter into orbit around Saturn. The impact into the rings of these secondary meteoroid bits kicks up the clouds that are being reported today. Because the tiny particles forming these clouds have a range of orbital speeds around Saturn, the clouds they form are soon pulled into diagonal, extended streaks.

Studying the impact rate of meteoroids from outside the Saturn system helps scientists understand how different planet systems in the solar system formed. Ring particles at Jupiter, Uranus and Neptune, for example, are very dark because an incessant hail of meteoroids has added carbon- and silicate-rich material. "But Saturn’s rings are unusually bright and clean, leading some to suggest that the rings are actually much younger than Saturn," said Jeff Cuzzi, a paper co-author and Cassini interdisciplinary scientist for rings and dust at NASA's Ames Research Center, Moffett Field, California. "To assess this dramatic claim, we must know more about the incoming mass flux. This latest analysis helps fill in that story with detection of impactors of a size that we weren't previously able to detect directly."

The Cassini-Huygens mission is a cooperative project of NASA, the European Space Agency and the Italian Space Agency. NASA's Jet Propulsion Laboratory, a division of the California Institute of Technology in Pasadena, manages the Cassini-Huygens mission for NASA's Science Mission Directorate, Washington. The Cassini orbiter and its two onboard cameras were designed, developed and assembled at JPL. The imaging team consists of scientists from the U.S., UK, France and Germany. The imaging operations center is based at the Space Science Institute in Boulder, Colorado.

Funding for Cassini research at Queen Mary is provided by the UK Science and Technology Facilities Council.