Bumblebees use logic to find the best flowers

Scientists at Queen Mary, University of London and the Zoological Society of London (ZSL), have discovered why bees copy each other when looking for nectar – and the answer is remarkably simple. 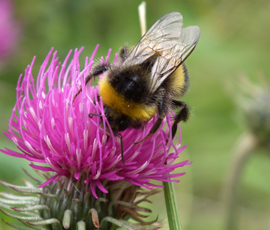 Despite their tiny brains, bees are smart enough to pick out the most attractive flowers by watching other bees and learning from their behaviour. By using simple logic, they see which coloured flowers are the most popular, and conclude that those of the same colour must also contain lots of energy-rich nectar.

“Learning where to find nectar by watching others seems fantastically complex for a tiny bee, but it’s something that almost any animal could do, in the right circumstances,” says Dr Elli Leadbeater from ZSL's Institute for Zoology. Dr Leadbetter is co-author of the study published this week in Current Biology and joins Queen Mary’s School of Biological and Chemical Sciences later this year.

Most worker bees visit thousands of flowers every day in their search for nectar to feed their queen’s brood. Copying flower colour choices may be a shortcut to success, bypassing the exhausting process of exploring each flower to see if it contains hidden rewards.

Tests were carried out in wooden laboratory “flight arenas” stocked with artificial flowers. Bees were trained to know that sugar could be found on flowers where other foragers were present. The bees then watched through a screen as their companions chose a particular flower colour, and ignored another.

When later allowed to choose a flower colour alone, the test bees copied their companions’ choices. “Naive foragers”, who had never learnt to equate other bees with nectar, did not copy other bees’ behaviour.

Erika Dawson, a PhD student at Queen Mary, University of London adds: “Our study shows how bees use past associations to make decisions about when to copy others, but almost all other animals, including humans, are also capable of forming associations. For example, we might associate Easter with chocolate or injections with fear. This suggests that other species, not just bees, may also use this logical process when learning from others.”

“We suggest that bees are using similar logic to a person, who might get a headache, and the next day, feel very ill. A week later, the headache is back, accompanied by a nasty rash. Even though they do not feel ill this time, when the rash appears again the following week, they start to dread feeling ill again, and think about taking the next day off work.”

The scientists also found that bees consider whether their companions are making good choices. In laboratory “flight arenas”, test bees did not copy other bees if they knew that those bees were visiting bitter-tasting flowers. Instead, the test bees actively avoided the flower colours that other bees chose. The flowers were made bitter using quinine - a flavour used in tonic water, which bees typically dislike.