The extinct flying reptiles, pterosaurs, likely spent little time on water, according to new research from Queen Mary University of London and the Royal Tyrrell Museum of Palaeontology. 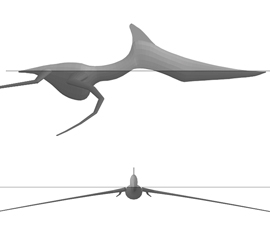 The researchers calculated the density of four species and how this was distributed across its body, based on fossils skeletons and knowledge of muscles and lungs. From this they created 3D digital models of pterosaurs and simulated how they would have floated on water.

They cross-referenced these models by digitally floating other animals of a similar size, such as geese, to compare the results.

“Sticking the pterosaurs model into the water immediately suggested that the possibility of it floating like a duck or gull is incorrect,” explained Dr David Hone from Queen Mary’s School of Biological and Chemical Sciences.

“We looked at alternate positions of the wings; we threw the head back to lift it up, and even experimented with alternate densities to check the overall strength of the model.

“In short, nothing made much difference. Pterosaurs don’t float like birds, and nor can we really make them do it, no matter how much we manipulate the model.”

Why does this matter?

The finding that these ancient reptiles perhaps did not float like birds might come as a surprise. Dr Hone added: “In addition to finding skeletons in rocks formed in lakes and seas, specimens have been found tens of miles from the coastline of the time, and a number of pterosaur fossils have even been recovered with fish preserved inside them.”

The new paper published in the journal Palaeogeography, Palaeoclimatology, Palaeoecology gives a different account of the postures of pterosaurs when floating.

Postures adopted by these models mean that animals would have been vulnerable to drowning if resting on the surface for extended periods.